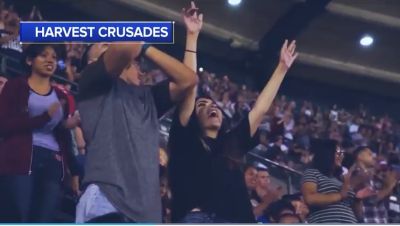 More than 10 000 people made professions of faith during Pastor Greg Laurie’s “SoCal Harvest” event over the weekend.

The three-day event was held at Angel Stadium in Anaheim, California and drew in nearly 100 000 people. And Harvest Crusades reports another 325 000 tuned in online via simulcast and Facebook Live.

Attendees were encouraged to bring their Bibles to make a public show of solidarity with the Word of God after a billboard controversy leading up to the event.

CBN News previously reported a local real estate company removed a series of Harvest billboards after receiving complaints and a “serious threat” because the ads featured an image of Pastor Laurie holding a Bible.

Laurie decided to take a stand for God’s Word, making that a key part of the event.

“Hold up your Bibles—we are not ashamed of the Word of God,” Pastor Laurie told the crowd. “Everything you need to know is in the Bible, no matter if people don’t want it displayed on a billboard or anywhere else.”

Laurie continued: “The message of the Bible answers all of our questions: Why are we here? What is the meaning of life? God says He created you, He loves you, and He has a plan for you. You can put your faith in Christ and be forgiven of your sin in a moment—it can happen for you tonight.”

Laurie was joined at the outreach by top Christian artists like Chris Tomlin, MercyMe, and Phil Wickham as he also focused special emphasis on America’s need for revival.

“Our state and our country need a spiritual awakening, and that starts right here, right now, with us. The last great revival in our country began in California, and we say: ‘Lord, do it again!'” Laurie preached.