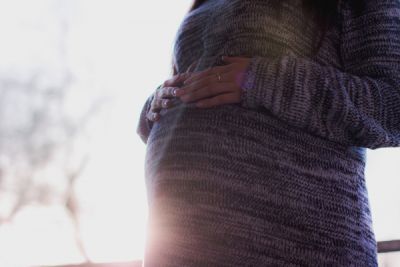 The abortion rate in the US has declined to an all-time low since the Roe v Wade Supreme Court decision which legalised abortion across the country, according to a new study released on Wednesday.

Conducted by the Guttmacher Institute, the research found that the abortion rate declined to 14.6 abortions per 1 000 women among women aged 15 to 44 in 2014. 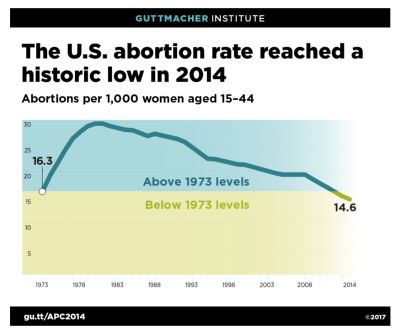 The total number of abortions that took place across the country also fell below 1 million for the first time in 2013, according to Guttmacher. That year, 958 700 abortion procedures were conducted, and in 2014, the study found the total number fell even more to 926 190.

Abortion rates were also found to have declined in all regions of the country and in all states but six and the District of Columbia.

The number of abortion clinics also decreased between 2011 and 2014 by 17%, according to the study.

Interpretations of results differ
Different interpretations of the study results have emerged since they were published. The Guttmacher Institute, for instance, said that the decline in the abortion rate may be due to an increased use of contraceptives.

“The primary driver behind the decline was most likely improved contraceptive use, which leads to fewer unintended pregnancies,” Megan Donovan, senior policy manager at Guttmacher Institute, told USA Today. “This is good news because it suggests women are increasingly able to access the resources they need to plan their families and avoid unintended pregnancy.”

Meanwhile, pro-life advocates heralded the results as the fruits of campaigns to prevent abortions.

“The falling abortion number is due to the ceaseless advocacy and ministry of the pro-life community in neighbourhoods all around this country,” Russell Moore, president of the Southern Baptist Ethics & Religious Liberty Commission (ERLC), told Baptist Press. “The pro-life movement advances by calling out to consciences with the truth of what unborn human life is and matching that call with real ministry to women in crisis.” 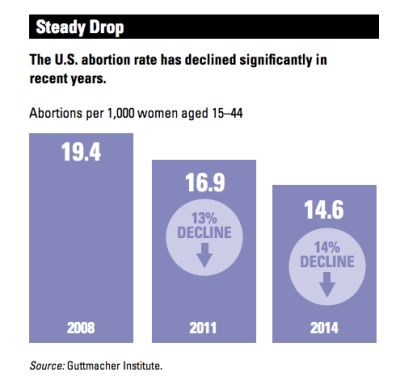 The study also revealed other findings. Patients in their twenties made up more than half of those who had abortions in 2014, and 12% of patients were adolescents.

The Western and Southern regions of the US saw the sharpest declines in abortion rates, both which saw a 16% decline. The Northeast and Midwest saw an 11% and a 9% decline, respectively.