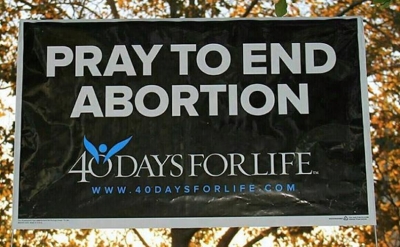 As Lent begins so does the pro-life initiative 40 Days for Life.

This year there will be pro-life vigils organised by 40 Days in 377 participating cities across 31 countries, with now over 150 cities outside of North America. In the United Kingdom alone there will be 10 campaigns running.

This will be 40 Days for Life’s largest ever Lent campaign.

Recently, I met up with two people involved in 40 Days for Life here in the United Kingdom. Robert Colquhoun is a veteran of 40 Days campaigns as befits his role as the organisation’s Director of International Campaigns. How does he prepare each year for the Lenten campaign: “It is always important to put first things first and mentally and spiritually prepare, putting prayer first before starting a campaign. It takes considerable courage and a lot of hard work to organise a good [local] campaign”.

Colquhoun says that the campaign and mission is the same every year: praying to end abortion, organising prayer vigils outside of abortion centres for 12 hours a day during Lent and conducting community outreach. He points out that “the whole point of this is to take a positive and upbeat pro-life message to the whole community”. Colquhoun feels that these are the core elements that make up a 40 Days campaign and therein lies its strength: “It is simple, and effective, because it works. Lives are saved, hearts and minds and changed and eternal souls are impacted. Abortion workers leave [their employment] and abortion centres close”.

In contrast, Sarah Bignell is a London wife and mother taking part this Lent in her first 40 Days for Life campaign.  So what was she hoping to achieve? “By bringing a 40 Days for Life campaign back to London, I wanted to redress the totally inaccurate portrayal of vigils and highlight the good work they do, so that it can be something Christians want to get involved as a beacon of hope and mercy for those facing a time of great difficulty.”

Bignell went on to speak about what motivated her to be present at a 40 Days vigil in a city not known as one disposed to pro-life vigils of any kind. “I wanted people to know that they can make a difference and to feel encouraged by the other 750 000 volunteers worldwide for 40 Days for Life who have helped saved the lives of over 15 000 babies. 99 abortion centres have closed where vigils have taken place and 172 abortion workers have left to join pro-lifers (some running vigils outside their former place of employment!). So by standing there and quietly praying you can make a huge difference!”

The very fact that there is a vigil in London is crucial, Bignell feels, to reminding women here that there is an alternative to abortion: “I do not think that the amazing work that pro-life volunteers and charities do to give women real alternatives to abortion has really been brought out into the fore. There are many unsung heroes who give up their time to stand patiently and peacefully in all weathers to bring prayer and charitable outreach to all those involved in abortion. These people have had all sorts of inaccurate accusations made about them and [in some cases] have been banned from actually offering help at the gate [of abortion centres]. This is making it increasingly difficult to bring the help to where it is needed: to women facing an unwanted or coerced abortion.”

After so many years on the frontline, one wonders what are the past highlights for a veteran campaigner such as Colquhoun. He has no trouble recounting them: “Meeting some of the children who are alive today because of 40 Days for Life. The courage of the mothers and God’s grace is a powerful emotional experience and the best pro-life experience ever.” He added: “It was amazing meeting 30 mothers at a crisis pregnancy Christmas party and wonderful to hear their stories of courage in the face of crisis. Often their voice and story is never heard. It is also amazing to meet so many of our leaders who sacrifice their time, effort and energy to see grace-filled results and to share their stories with the rest of the world”.

According to the World Health Organisation, an estimated 56 million abortions are carried out each year worldwide. To put that into context, that is roughly the equivalent population of the United Kingdom. In England and Wales alone there are around 200 000 abortions carried out annually. Currently, there is increasing political pressure to lift the few legal restrictions there are on abortion in the UK, and which, inevitably, would mean an ever-increasing rise in this statistic.

Bignell is acutely conscious of all this, but, also, sees her witness within a global context: “I am concerned by the recent changes in abortion laws around the globe, such as in Ireland and in New York”. She added: “Abortion is the atrocity of our times. The attack on unborn children has never been greater; the need to pray for them has never been greater. 40 Days for Life unites people around the world from many different countries to pray about abortion”.

Standing witnessing to life outside a busy abortion centre in London is daunting. So, does Bignell have any fears?  “Yes: that the voice of the women who want us there will be silenced. For those who say: ‘why weren’t you there on the day of my abortion, if you had been there I might have my child with me today?’ and of the Mums who are so grateful for the chance of having a child, when they thought their only choice was abortion”.

Like so many others across the globe this Lent, Bignell has started on a journey that has the unborn at the forefront of her prayers and witness. She says she has only one hope: “That God will bless our efforts”.