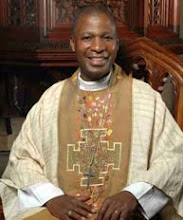 Anglican Archbishop of Cape Town Thabo Makgoba, 51, will be inaugurated this evening as the new chancellor of the University of the Western Cape. He takes over from Archbishop Emeritus Desmond Tutu, 80.

In an interview with Radio Tygerberg today, Makgoba said: “I think there is a lot of money that is being poured into education. But the state of education in our country is not serving the country. It is not producing enough skills. It is not creating jobs and we need to look at why it is so — why are we failing our children.”

The Office of the ANC Chief Whip in Parliament today welcomed Makgoba’s appointment, describing him as : ” one of the most experienced and visionary leaders”.

In an interview last week, Brian Williams, chairman of the UWC Council told the Cape Times that the decision about who to appoint took many long and in-depth discussions about the university and its future direction.

“The decision was made to follow a path of enrichment by having a spiritual leader of the calibre of the Archbishop as the symbol of what UWC stands for. ”

Makgoba was born on December 15, 1960. He graduated from Orlando High, Soweto. Since then he has obtained a Masters Degree in Educational Psychology at the University of Witwatersrand (Wits), where he also lectured part-time from 1993 to 1996 before going to St Paul’s College in Grahamstown to study for the Anglican ministry. He married Lungelwa Manona.

Makgoba’s first few years in ministry were spent in the Diocese of Johannesburg; first as a curate at the Cathedral and then as Wits chaplain. After that he was put in charge of St Alban’s Church and later of Christ the King, Sophiatown. He became Archdeacon of Sophiatown in 1999. He is also patron of two organisations, Hope and Africa for Haiti.  He has served as Bishop of Grahamstown and of Queenstown.

In 2009 he graduated with a PhD from the University of Cape Town with a Thesis on: Workplace Spirituality, and in the same year he received an Honorary Doctorate of Divinity from the General Theological Seminary in New York.

In 2007 Makgoba, at the age of 47, became the youngest person to be elected as the Archbishop of Cape Town.