An ongoing programme of 15-days of live, online worship is changing the atmosphere in South African homes during the current lockdown — and it is also awakening the hearts of participating worship musicians, said Julita Kok, one of the organisers of the initiative on the WorshipSouthAfrica Facebook page.

She said it seems there is an awakening in the country to the fullness of what Jesus did on the cross and that the worshipers’ hearts have suddenly been awakened to what God is doing and “it is not about my music any more and what I can do” but each one brings something to the table and together they are creating something beautiful.

She said 225 worshipers throughout SA have signed up to do 45 minutes slots from their homes and the number is growing. The live worship from 6am to 12 midnight daily began on April 1 and is scheduled to end on April 15.

“It’s amazing. And guys are already saying when lockdown ends, this cannot stop. They are talking about creating something,” said Kok.

“It is awesome because we are going to need this army [of worshipers] that is arising and awakening.”

On Resurrection Sunday a special programme of prophetic prayer and worship and communion will be hosted on the WorshipSouthAfrica Facebook page. Everybody is invited to celebrate Jesus’s victory with Retief Burger, Joe Niemand, Stella, Hennie Maritz, Clarice Pieterse, Marinus Hayes and Arno van Wyk. Have your own communion ready, say the organisers. 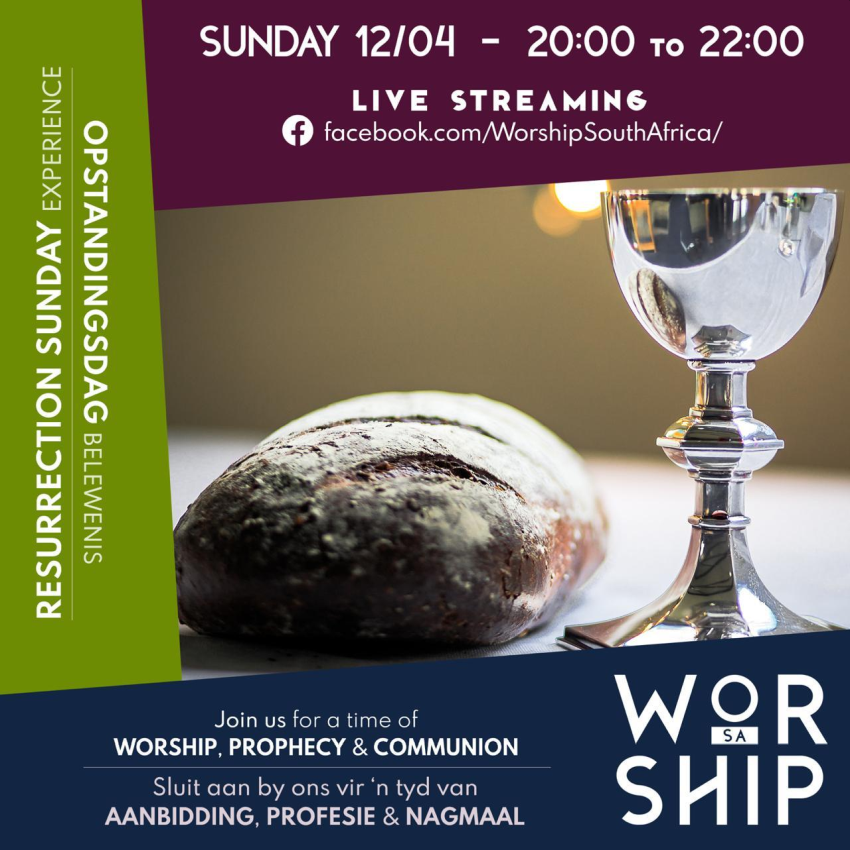 Kok said that from feedback worship leaders have been getting after their slots it is apparent that many Christians who have been in fear are turning to God and experiencing peace through tuning in to the worship sessions. People have sent messages that they have the worship playing all day on smart TV screens and it is changing the atmosphere in their homes — children are not fighting any more and children and moms are singing worship songs as they go about their day.

One worship leader prayed against suicide during a slot because she sensed somebody watching was considering suicide. Afterwards, she received a message from a listener who said that on some days she felt like giving up and taking her own life but after hearing her message she felt better.

A journalist testified that she dealt with depressing news and statistics from around the world every day and that it sometimes weighed her down, especially in this time of isolation.  She has now begun to play the live worship music as she works and it has made a huge difference in her heart.

There were even testimonies of non-believers confessing their sins after exposure to the worship music. “This is because the Sprit of Truth is working in them,” said Kok.

Regarding the arising army of awakened worshipers that she sees, she says God previously showed her that a holy war — for souls — was coming and He needed an army of worshipers to send out first according to the Old Testament pattern.

“God told me two years ago about an awakening that’s coming. He said it was going to be an awakening within people’s spirits about who God truly is and what Jesus did on the cross. We all understand that He died for our sins — but the abundant new life that He has given us through the cross: people do not fully understand that — they think it is for some day, they do not understand it’s for now.”

Burn 24-7, a global prayer and worship platform, in which many South African worship musicians participate, is also hosting a 168 hour virtual burn (non-stop worship) from Palm Sunday to Easter Sunday. You can listen to live worship from around the world on the website https://www.burn24-7.com/