A call for you to rise up into a new way of being and living with God.

Every so often a global kingdom project comes up that will impact many nations in a profound way. At Gateway News, we enjoy writing about South African and African news to share what God is doing in our country. Our heart though is always to share about what is happening in the Kingdom of Heaven.

What I am about to share with you is a project that could so greatly impact our generation, and the generations to come, and it may open up floodgates of God’s presence pouring into the media and see many lives saved and touched in the realm of the supernatural.

You may or not know of Wendy Alec, the original founder of God TV.

Wendy is the author of the book series Chronicles of Brothers, a supernatural epic thriller that portrays the banishment of Lucifer; his defeat at Golgotha and centres on three earthly brothers — The De Vere Dynasty — an illuminati family, one of which is the Antichrist, and three archangel brothers, Michael, Gabriel and Lucifer.

Chronicles of Brothers has sold nearly a million books — it is now one of the great self-publishing stories in the UK. (Recipient of Outstanding contribution to Literature Award & Outstanding Fiction Writer in Exceptional Writers Awards).

Wendy is currently heading up the big and beautiful God assignment of turning Chronicles of Brothers into a TV series. Ok, yay!

Mark Ordesky, the producer of Lord of the Rings said about Chronicles: ‘There is no greater canvas for film making’.

For a long time, I have sat and dreamt with fellow dreamers and visionaries about movies and TV series being made that depicted the heavenly realms and paralleled them to life on earth so that people would know what heaven is like, and who Jesus really is, without any religious connotations or obvious story lines that give away the mystery and journey of discovering truth.

Chronicles of Brothers is exactly that. It’s deep, intense, and opens up the realm of the supernatural in a way that leads straight into the arms of the Father. 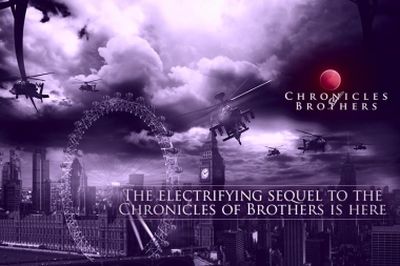 I am a huge Lord of the Rings fan, because of the eternal truths it carries. Tolkien was a prophet, and a seer, and that’s what enabled him to create the world of middle earth. He saw into the spirit, and with his creative originality he combined what has been, the now and the not yet into a story we could all submerge ourselves into and find answers to questions we never knew we had.

So many time’s God will reference things in the books to confirm what He is doing in my life.

What lingers in my memory though, is the images from the movie. We all know the power of turning a book into a movie or a TV Series. It reaches people who would never read the book, and it can change your life. Those visuals always stay with you and stir you onto believe that life can be great. Wendy is a seer too, and she has tapped into an understanding of the things unseen, unknown and known, and with the paint brush of her imagination she has created a work of art for the world to step into.

She has gathered an amazing team together for this series. Ileen Maisel, the Senior Vice President of New Line Cinema Europe will co-produce. She is the producer of Dangerous Liaisons, Ripley’s Game, Inkheart and Golden Compass. David Kangas, a producer at Sky TV and ITV, is their line producer. Andy Briggs, one of the most respected UK screenwriting talents working in London and Hollywood, will work with Wendy to create this masterpiece.

Here is a preview of the series:

Here’s the fun part. Wendy is crowd funding the movie. This gets me so excited because how often is it that you get to be part of something this big. At the moment so many of us are looking for worthy kingdom causes to give our money to. We want our generosity to make the most impact, and choose investments that bear great fruit. Chronicles of Brothers TV series may well just change a generation and open the gates to more series and movies being made of this calibre.

I have often felt that you should give where your passion lies. Give into what thrills you and makes you feel a little giddy headed to give into.

That is why I am writing this article, because I think if you love good series, creativity, innovation, advancement, taking risks, fresh thinking, and the chance for people to meet God in their living rooms, then maybe this is a kingdom endeavour you have been waiting to give into.

I want to add this, because this is the part of the story that really moved my heart. Wendy has been in a battle all of her own, the details of which are hers to share and not mine. She is moving forward on this God assignment while she is right in the middle of a great trial, of which she will be victorious of course! But she’s not taking it lying down, and she’s encouraging and promoting others along the way. So many of us are in similar situations, and also have God size dreams. Her example of not waiting for the situation to change before embracing the dream, but rather going after the dream in faith that the situation will bow to the favour of God on her life, is what has me saying, I’ll get behind that. And doing so, I hope faith catches like wild fire to everyone who encounters her story, to believe, that the impossible is not just possible, it’s here and it’s for the taking for those who will simply believe, that He’s God, and He will do what He said He will do.

Wendy has set up a go fund me page, and here’s the link.

You can also have a look at her Facebook page where she puts out updates and prophetic words that have some serious fire power on them.