Most of us have been through something that made us feel ugly.

A break-up, an abuse, a loss, poverty, disappointment, depression, all manners of rejection …

The list is vast — how we’re left feeling though, is universal.

We’re left with the feeling of inability, self-doubt, fear and sometimes, even when we overcome many obstacles and achieve things we never thought we could, there are those times when the ugly threatens to derail us and take us to that place where we felt small, insignificant and utterly unable.

What we all know with absolute surety, in the depths of our core, is that we are absolutely able, that we are amazing, that we have so much wealth on the inside of us it’s impossible to not believe we were destined for great things.

It is this knowing that often frustrates us — whether we realise it or not.

It doesn’t matter how far down we plunge, or how tragic our circumstances feel, those are not what bring us down; what brings us down is that knowing that we’re meant for so much more.

When I began The Beautiful Series Event last year, I was in the process of emerging from a place of loss, utter devastation in my career, suicidal depression and hopelessness.

It was out of my own desperate need for encouragement that I rallied as many women as I could to hold onto each other and be reminded of who we truly were, despite the uglies that had come against us.

It’s been almost a year since that first event and now I believe that the call to us is to: “Get on with it”. 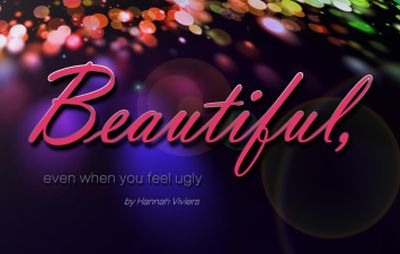 I remember, years ago, watching a young woman on Oprah who had gone through the loss of her face. Yes, she lost her entire face.

She’d been in a car crash where everyone she’d been with died.

She was the only survivor.

Flames had engulfed the car she’d been in. By the time rescuers got to her she had burns all over her body. Those burns symbolised that from that day on her life as she had known it would never be the same again.

This girl who had once looked like a magazine cover model now had a face that had no form. No amount of surgery could ever give her back what she lost in that fire.

As she told her story on Oprah she recalled how she’d cry every day for hours. From the pain, from the loss, from the reality of what she was living…

She said one day her cousin told her: “You’ve cried enough now.”

Her cousin went on to tell her that she could cry for a few minutes a day, but that was it. It was time for her to get on with her life.

Oh how harsh that sounds! But it was that push — to “get on with it” — that this young woman said helped her start to living again.

She realised she could grieve for the rest of her life, or she could live.

She chose to live.

We are only victims when we accept the lie that we are powerless and that our beauty, joy, wholeness and fulfilment depend on someone or something else changing our circumstance.

She shared how people stared at her, that it was still very hard, but she had decided to enjoy her life.

While this young woman’s face would never be what it once was, she found healing that gave her peace and, yes — even joy in the midst of an ugly that had threatened to snuff her out.

We all have an ugly. What’s yours?

We are only victims when we accept the lie that we are powerless and that our beauty, joy, wholeness and fulfilment depend on someone or something else changing our circumstance.

This year I’ve felt God urge me to get out of my own head. To stop being so focused on myself and the number one concern for most of us: “Me”.

I was in my kitchen not too long ago — complaining and feeling very sorry for myself for all the things I felt weren’t going my way.

I thought I was praying but turns out that what I was doing was nowhere near prayer — I was throwing a tantrum like a two year old would.

So there I was, ranting away at God — asking Him when, oh when were things I was believing for going to happen?!

Right in the middle of my pity party I felt God cut right in and ask: “Hannah, when is it not going to be all about you?”

He asked in such a gentle, loving manner that I knew He wasn’t angry or fed-up with me. This was a loving call from a Father who knows all too well the dangers of being that self-focused.

In His question, He was turning my face to see the bigger picture — that there was more to all this than just me — or what I thought I “needed”.

The bigger picture is this: You, beautiful one are the answer someone else needs.

As long as we’re obsessed with fighting the ugly coming against we can never release the beauty we’re meant to.

Look any which way and you’ll see desperate need.

Schools that need to be built. Poverty that must be uprooted. Children who need to be rescued. Men who need to be loved unconditionally and reminded of their royalty. Women who’ve been so broken they no longer even know what beauty is.

The ugly didn’t come to only destroy you beautiful one. The ugly came to stop you from releasing your beauty; so that the answer you were meant to be would never be realised.

The answer isn’t for us to pity those situations. The answer is for us to get on with it and respond to the desperate needs that surround us.

The ugly didn’t come to only destroy you beautiful one. The ugly came to stop you from releasing your beauty; so that the answer you were meant to be would never be realised.

When God placed the title of our upcoming October 7 event on my heart, I knew His invite came with an assignment:

Run! Get on with it!

You may be in heels, trying to look good through your ugly. It might be uncomfortable running while trying to keep your heels on, but run anyway. Finish the course that has been set before you.

Whatever you may have been through, or are going through right now, that’s got you feeling ugly, know that you are beautiful. And you are a warrior.

Despite the ugly you may be battling, it’s time to get on with it. There’s a bigger picture. We’re being called to see it.