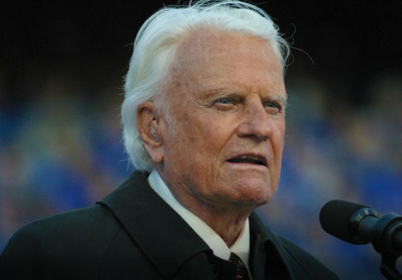 At 96 years old, Billy Graham’s desire to share hope with the world is as strong as ever. On his birthday today (November 7) the Billy Graham Evangelistic Association will debut Heaven, a film that includes a never-before-seen message from Billy Graham.

Graham’s message was recorded last year, while the aging yet still passionate evangelist worked with a camera crew to capture his thoughts in a series of interviews at his home in Montreat.

“I know I’m going to heaven. I’m looking forward to it with great anticipation,” said Graham, who explains in the film how people can share that same hope.

When Graham celebrated his 95th birthday last year in Asheville, 800 guests gathered to watch The Cross, a 30-minute program that was the first of a five-year project called “My Hope with Billy Graham”. The 2013 film was the largest outreach ever conducted by the Billy Graham Evangelistic Association, shared through thousands of churches and watched by hundreds of thousands on television in the U.S. and Canada. This year, “My Hope” will have a special focus in the United Kingdom as more than 9 000 churches in the country are participating in the outreach.

For his 96th birthday, Graham plans a more subdued evening at home enjoying the company of family members who plan to visit him during the week of his birthday. However, he hopes people will join him in watching Heaven, the latest My Hope with Billy Graham film.

“Although his physical condition keeps him homebound, he remains interested in current events and the ongoing work of the ministry that he began more than 60 years ago,” says Franklin Graham, his eldest son and president of the Billy Graham Evangelistic Association.

“Opportunities like My Hope and the Heaven film are ways that we can help my father to continue the work that God called us to do. Please pray for my father, and for those who will watch this film—that they too may know the peace found in Jesus Christ.”

As he turns 96, Graham continues to struggle with deteriorating eyesight and hearing. But he does have the ability to begin and end many days with devotions, Bible reading and prayer with his staff. He also enjoys the opportunity to spend time with family and close friends who visit with him.

Billy Graham’s new film Heaven is available on DVD and can also be viewed online at MyHopewithBillyGraham.org/programs.