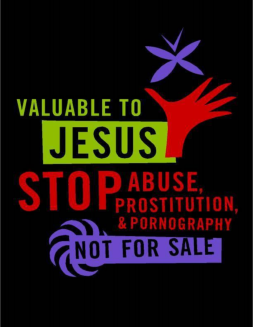 A new US research study from Microsoft and The Internet Watch Foundation showing that there is a rise in youth-produced child pornography highlights the need for empowering children to protect themselves against sexual abuse, says Corinne Sandenbergh, Director of STOP (Stop Trafficking of People).

“We at STOP have an amazing programme, Valuable to Jesus, that we gladly share with anyone interested in going into schools to do awareness on how to protect yourself against sexual abuse,” she says. The programme, which was developed by Straatwerk is aimed at primary school children.

According to the new research study that was published in March, 2015,  and brought to STOP’s attention by the National Center on Sexual Exploitation (NCSE), 85.9 percent of content depicting children aged 15 or younger was created using a webcam and 93 percent featured girls. While much of the content appeared to be knowingly created for websites, the study indicates that 100 percent of the content was shared to third party websites, which cannot be traced. The researchers noted a specific concern that the young people featured, “took no steps to conceal their identity or location, even in many cases using their real names.” The study also found that 667 of the images and videos evaluated featured children 15 years and younger, and of this group, 286 were 10 years or younger. The researchers said their report confirms an alarming trend of young children producing and distributing explicit content online.

“Children producing and distributing child pornography is a profoundly disturbing trend. We are in the midst of a public health crisis on pornography. Every public official from the president on down, public health advocates, social leaders, as well as every parent must work to solve this crisis. We know that the long-term consequences to our children involved with pornography are monumental and can include problematic, even criminal sexual behaviors, and a host of anti-social activities,” says Dawn Hawkins, Executive Director of NCSE.

Hawkins calls on parents to talk to their children about healthy sexuality and the real consequences of pornography — “even if your child or the children in your life are ‘responsible’ and ‘know better'”.

STOP says there is a need for more people to take the Valuable to Jesus programme to schools to warn children in the name of Jesus against abuse, prostitution and pornography and to bring  them the hope of abundant life in Christ. The programme resource package can be ordered by contacting STOP at 021 886 7726 or admin@stoptrafficking.org.za

During school visits the message shared is followed by giving each child a care package. Each package contains a Valuable to Jesus key chain and hand-knitted doll which emphasises truths taught in the programme.