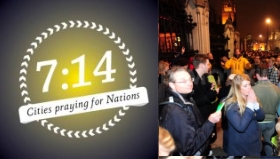 Christians in cities in South Africa and around the world will unite for an hour of public prayer for their nations from 7.14 pm to 8.14pm tomorrow (December 1) as they participate in the global 7:14 prayer initiative.

Named after the inspirational intercessory Bible verse, 2 Chronicles 7:14, and timed to coincide with the start of the Christian Advent season, the prayer hour was initiated by international prayer network Jericho Walls.

In a statement promoting the initiative, Jericho Walls says that in a time when nations are shaking politically, economically, socially and environmentally, God calls his people to pray. The statement calls on Christians to make a visible statement of faith by praying  visibly in the heart of their cities, for their nations and their leaders.

A list of 55 participating cities, and 7:14 prayer venues is available on the event website.  South African venues include the Cape Town Train Station (forecourt adjacent to Adderley Street), Jubilee Park in Pretoria (on the corner of Kotze and Troy, Sunnyside), the parking area of the shopping centre in Gillits (No 7 Old Main Road), and in Port Elizabeth the prayers will gather in an open area next to the Lorraine Full Gospel Church (corner of Luneville Road and Van Eck Street). Anybody wanting to attend should arrive at the venues from 7pm.

Prayers participating in the 7:14 initiative will also meet in some highly visible places in cities in the United Kingdom, Europe, Australia, Malaysia, United States of America and Colombia. Gathering places include outside St Paul’s Cathedral in London, on the steps of Parliament House in Melbourne, in front of the European Parliament in Brussels, on the steps of the Lincoln Memorial in Washington DC and St Andrew’s Square in Edinburgh.

On their page, the organisers of the New York event, which will be at the fountain, Washington Square, say: “Complete freedom is encouraged. Please pray and worship as you feel led by the Holy Spirit. The joy of the Lord is our strength.”

On the London page, the Bishop of London,  Richard Chartres, says: “Prayer is the world in which God can do anything. To move into that realm is the greatest adventure. It is to be open to the infinite and hence to infinite possibilities. Our private, self made worlds, come to an end; a new world appears within and around us and the impossible becomes an everyday experience. Yet the world that prayer reveals is barely noticeable in the ordinary course of events. Hundreds of people gathering outside St Paul’s Cathedral on December 1st will give the world a positive vision of what the church exists to be and do.”

The 7:14 organisers say the video clip below, when 1 500 people gathered for a 7:14 prayer hour in Parliament Square, London on  March 15, gives a foretaste of tomorrow’s events: