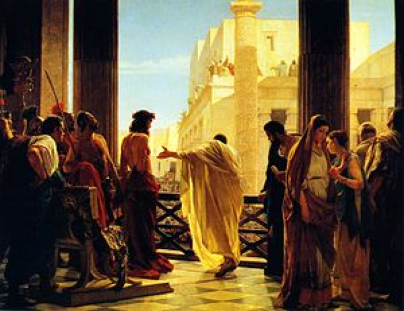 [notice]Pastor Bongani Mgayi warns that the Church should not become distracted from the one activity that it alone can fulfil.[/notice]In about AD 33, a senior government official enquired: “Quid est veritas?” His name was Pontius Pilate, the Prefect of the Roman province of Judaea. He wanted to know from Jesus, “What is truth?“

The same question may be posed today in light of the escalating tragedy around our country.

At Marikana 44 people were killed; in the townships of Cape Town 5 people were killed by rioters. There are numerous other references to the chaos and darkness currently brewing around our beloved country. These events leave the community, victims and families of survivors with a yearning to understand what happened.

The truth is hard to get hold of. The world’s media, official reports and statements are filled with deception and half-truths. Media houses publish reports that have been filtered through their editorial boards. What you read and hear may be far from the truth.

Hard to accept
The truth is as also hard to accept. For instance, on the eve of the shooting, the miners at Marikana allegedly paid R 44 000 to a sangoma to give them muti which would make them invincible to police bullets. Now the Bible declares expressly that messing around with the occult attracts misfortune and loss (Deuteronomy 18: 10-12).

But, who will speak this truth?

The Church has the mandate to make known the truth to a lost and confused world. The Church is the only conduit for truth. Company annual reports, government statements and media analyses by nature cannot be channels of truth, since these explicitly distance themselves from the Gospel of Jesus which contains the truth.

But, the Church’s resources are thinly divided. The Church is also distracted.

Due to corruption and negligence, the Church has taken over the functions of government and public servants. There are many parachurch organisations involved in welfare programmes. Countless hours and millions of Rands go into these programmes. Though the state collects all the tax and has thousands of people in its employ, the Church is cooking for the poor, cleaning the streets, taking care of orphans, running shelters and providing medical care for the destitute.

These programmes may be noble, but, the state should offer these services to its citizens, from which it received the mandate and tax to run the country.

If the Church and its organs carry out these services it should be to provoke those in authority and to jolt them into action. It should not be as justification for the purpose and existence of the Church. If the Church gets too involved in welfare interventions it risks misplacing its scarce resources and focus.

God was furious at the rulers and princes in the time of Jeremiah and Isaiah because they never took care of the poor, widows and orphans (Isaiah 1: 23; Jeremiah 22: 1-3). God rebuked the Temple and its false prophets for not speaking up for the poor and orphaned (Isaiah 1: 17; Jeremiah 5: 28, 31; Lamentations 2: 14). In these scriptures the responsibilities are divided neatly. The rulers care for the poor and orphaned; if they don’t the priests and prophets are to hold them accountable.

Staying with the Marikana case, the instruction to the Church is clear: “Defend the poor and fatherless: do justice to the afflicted and needy,” (Psalm 82: 3, emphasis added, KJV). The Church is to speak up against the injustices and schemes of the rulers, state and mine bosses. It would be an abdication of duty if all the Church does is prepare food parcels, conduct the memorial services and provide counselling to the victims and their surviving families.

Often in carrying out welfare programmes, the Church neglects the one activity, only it can fulfil – to speak the truth. If the Church is silent with the truth, then there will be no salt in this unsavoury world and no light in these hopeless times.