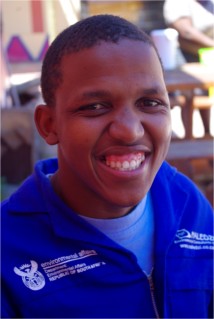 A young wheelchair-bound man from Walmer Township, Port Elizabeth, has been invited to travel to New Orleans with his dance and drama group later this year.

Sandile Msizi (23) has not let the fact that he has been restricted to a wheelchair his whole life stop him from joining the African Renaissance Dancers in 2010.   “I used to not do anything. Just sitting around all day was boring.” said Sandile of what prompted him to pursue a position with the group.  “I was thinking this was my chance to be involved.”

Initially Sandile approached the idea of joining the group with caution.  “I was nervous”, he said of his first few encounters with the vibrant entertainers whose dance styles include traditional dance and kwela.  He would attend their practice sessions, watching quietly from the back of the room until one day he was invited to join in.

Sandile is now a member of the group, attending the daily rehearsals and taking part in performances.   When asked if he joins in with the dancing, he smiles and says that when th dancersy go on stage, in his mind he would like to be moving with them, but no, he doesn’t dance.  He has however found other ways to be involved.  Sometimes he plays ‘DJ’ behind the computer and he has even flexed his muscles at acting, taking to the stage in some of the group’s drama productions.  He is also excited about recently being taught how to beat a drum.

In June last year, the group received an exciting invitation to attend a special event promoting South African culture as part of the annual Making the Connection Celebrate Africa Week to be held in New Orleans in October 2011.  The invitation came from the New Orleans South Africa Connection (NOSACONN), a non-profit organization dedicated to increasing the awareness of economic development and tourism opportunities between South Africa and the United States by promoting music, arts and culture and building relationships between the two nations.

Sandile says that he has wished to visit America for a long time, and is clearly excited about the prospect of international travel alongside his newfound friends and fellow cultural enthusiasts.  He needs to raise R14 000 to cover his return flight, as well as a little more for a trip to Cape Town to apply for a travel visa.  Transport and travel costs while in New Orleans will be generously provided for by NOSACONN.

Life is certainly not boring anymore for this industrious young man.  As well as his commitment to the group, he is also currently working for a recycling and crafting initiative in Walmer Township.  His willingness to get involved in his community is the spark that has led to the opportunity of travel this year, and who knows where this eagerness  will lead in the future.