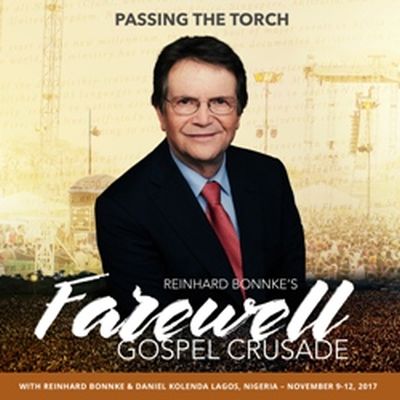 Evangelist Reinhard Bonnke, founder of Christ for all Nations (CfaN), will return to Nigeria for his final African Gospel -­ Crusade in November 2017.

While certainly not CfaN’s final African crusade, Bonnke’s return could inspire another historic attendance like the crowd at the Lagos, Nigeria Millennium Crusade in 2000, CfaN’s largest crusade to-date, says the evangelistic ministry in a media release.

During the 2000 crusade, over the course of five nights, 6-million attended and 3.4-million decisions for Christ were made.

In November 2017, CfaN anticipates many decisions for Christ in response to Bonnke’s farewell message. One of the highlights of the crusade will be a Passing The Burning Torch Conference for leaders and church workers. Bonnke is believing for many thousands of pastors and evangelists from around the globe to be inspired to evangelism, says CfaN.

Expecting a spectacular harvest
John Darku, CfaN’s African director says: “This crusade will be like none we have seen before. Currently we plan to recruit 500 000 counsellors, 200 000 intercessors, a choir of over 23 000 and a security force of over 10 000. There is great excitement from all the churches in the country, and we are expecting a spectacular harvest of people coming to Christ.”

Lead evangelist of CfaN and successor to Bonnke, Daniel Kolenda says: “I’m thrilled to join with Reinhard in this vision, and know that the results of this crusade will be farther reaching and of even greater consequence than we can even imagine.”

Since then, he and the CfaN team have organised events in Africa that have grown from handfuls of attendees to the winning of over 76 million registered decisions for Christ in Africa since 1987.

Looking towards November Bonnke says: “The Lord spoke to me, that I should go back for one more crusade in Africa. I want not only to see a gigantic harvest of souls, but to pass my burning torch to this generation.

“Recently, I travelled to Lagos, Nigeria to meet with the spiritual leadership there and they gave their unanimous support. I believe God is going to do something I have never seen before.”

Peter Vandenberg, Executive Vice President of CfaN, who has worked alongside Bonnke for over 35 years, says: “Millions in Africa now know the Holy Spirit, thanks to one man’s incredible commitment to a singular God-given vision, and to his forming of a longstanding organisation and formidable team of anointed future leadership around that vision.

“This November, Evangelist Bonnke will enter and leave Africa possibly for the last time, bidding a bittersweet farewell to a continent and people who he very much loves and have been the centre of his life’s mission.”