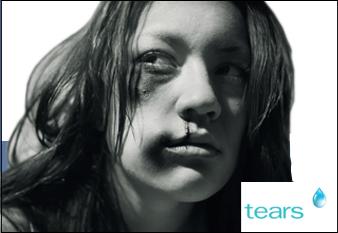 As South Africans feel outrage at latest rape headlines a movement of hope called Tears calls on citizens to wear blue tomorrow (February 14) in solidarity with Tears and V-Day, a day of global rising against abuse of women and children.

Tears, a private initiative which aims to transform attitudes about rape and sexual abuse through education and information, and to support victims, has been successfully promoting the V-Day One Billion Rising campaign over the past three weeks and will launch its blue teardrop logo on V-DAY. Citizens are urged to join V-DAY events in centres throughout South Africa.

Symbol of weeping, hope
The logo, will be launched to South Africa first and then globally, as an international symbol against rape and sexual abuse. It is a symbol of universal weeping for the violence and degradation suffered by rape victims, but more importantly, a symbol of cleansing, healing and ultimately hope, says Tears in a media release.

Tears Founder, Mara Glennie says “Launching the international symbol from South Africa has significant purpose as we are ashamed to be called the ‘Rape Capital’ of the world”.

Violence against women is a global problem and according to onebillionrising.org, right now 1 in 3 women on the planet will be beaten or raped during her lifetime. South Africa has the highest incidence of rape in the world: 64 514 rapes were reported last year, but most go unreported and it is estimated that there are about 1.5 million sexual crimes in SA each year. There is also a culture of raping babies, children and elderly women and studies show that rape is rampant in schools. The rape problem also exacerbates the serious HIV Aids problem in the country.

Restore dignity
Tears stands for ‘Transforming education about rape and sexual abuse’ and the NPO says it hopes its blue teardrop symbol and its information platform will “restore our dignity to the rest of the world to show our efforts in removing this scourge from our society”.

Tears has been sourcing and collating a database of services; medical, medico-legal, legal and psychological, currently available throughout South Africa, for the assistance and support of survivors of rape and sexual abuse. This database will be accessible to all South Africans, free of charge, via the web, mobisite and through interactive SMS on cell phones by means of a USSD interface. The database comprises 555 crisis facilities throughout South Africa and the technology links callers to appropriate facilities in their vicinity.

The cost per SMS is 40 to 60c, depending on the provider. As the idea is for the caller to receive this information for free, these costs will currently have to be borne by TEARS.

“We hope for the media to convince South Africa’s cell phone providers to offer this service free of charge,” says Tears.

Tears strategist Ronelle Palmer-Owen says they have been targeting corporate partners so far but have spoken to some churches. Any churches interested in supporting the initiative was welcome to contact them at info@tearsSA.co.za or 0860 TEAR | 0860 8327.

Expecting miracles
“The Tears team are Christians and our motivation is from above. God has opened doors for us where we did not think possible, with the implementation of the programme. We expect miracles to happen as we fully expose this scourge in our society.”

“While it is unrealistic to believe we can eradicate this type of violence completely, by increasing awareness we hope to significantly reduce it, and at the very least, provide the resources to ensure that victims gain access to the help they need,” says Tears in its Business Overview.