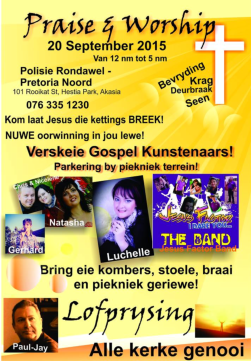 ‘God’s response to doomsday prophets: healing through lifting up Jesus’

Seven years ago Paul-Jay Albrecht organised a praise and worship event in the northern districts of Pretoria. His heart was to have an event where people who needed God could come and meet Him in a place where they felt comfortable and not pressured or judged. The day before, he and his team of organisers drove round and round the school that was their venue, asking God to bring in the people that He wanted to have there.

The response was phenomenal, not in terms of numbers, but in terms of need. God sent in homeless people off the streets, drug addicts, people who really had a pressing need for God, and many of them gave their lives to Christ. Paul Jay says that at one point he so felt the Holy Spirit take over the whole proceedings, that he just stuck the microphone in his back pocket and let God work!

Calling to do it again
Paul-Jay says that God has placed it strongly on his heart to do this again. Specifically in this time when there are so many doom prophets prophesying the end of life as we know it and the many attacks that are coming against the children of God. He says he senses that God wants to come and bring healing through the lifting up of Jesus through praise and worship. He believes God wants to come and take over the proceedings of this event, just as He did 7 years ago.

He also believes that God wants to lift us up in this time and that many people who do not see themselves as “ministers” will start ministering by the Spirit of God, just as Jesus called simple fishermen to be His disciples and apostles in His church, the Body of Christ. His desire is to make us, the church, more aware of this move of the Spirit. Thus he has organised this event himself, along with two friends, Adri and Colinda, and they do not want to be connected to a church or denomination at all. Their heart and expectation for this event is that Father God will bring healing to those who are hurting, and that people who would not ordinarily attend church will come to meet Jesus there, at a simple “braai” where Jesus is being glorified through praise and worship.

The Praise and Worship Event will be held on Sunday, September 20, 2015, at a church venue behind the Police Rondawel, 101 Rookat street, Hestia Park, Akasia, donated for this purpose by Pastor Wessie of the congregation that meets there. It was at this same venue that a praise and worship session was held some time back and people were coming out of the bar and restaurant adjacent to the venue and giving their lives to Christ.

Free entrance
Entrance is free and all are welcome to bring their own gazebo’s, camping chairs, “Weber braais” and refreshments and listen to a variety of musicians glorify the name of the Lord. The artists will include Luchelle van Niekerk, Jesus Factor Band, Natasha, Chris and Nicolene and Gerhard. Luchelle will be bringing in a TV crew to film the event and this will be broadcast on her television program “Luchelle On The Road” on Revival TV Livestream at a future date. Luchelle is also currently in negotiations with Kyknet to possibly have her programme aired on DSTV.

The Praise and Worship event will continue for the whole afternoon, from midday to 17h00. It is an opportunity for children of God to bring their friends, family and colleagues who might feel intimidated by formal church buildings and procedures. In this informal, friendly environment they can be introduced to the heart of the One Who died for them.

Paul-Jay says they hope to possibly make this a more regular event sometime in the future, depending on the need. However, he is first trusting God for many to come and receive breakthrough and healing at this event on September 20. He says it is not about the numbers, but the appointment God has with individual people and the lives He wants to change.