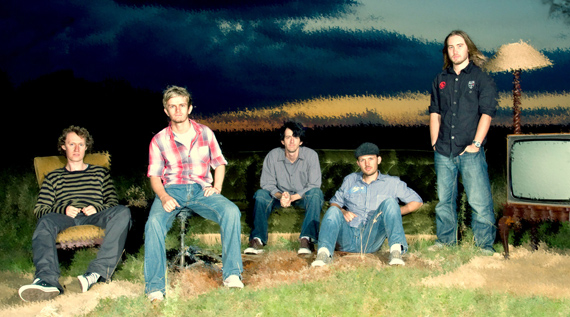 Johannesburg-based Christian melodic rock band ::Harbourlight:: are making a name for themselves in the Christian music scene in South Africa. They recently came to Port Elizabeth in April and played at well-supported events at Lighthouse Family Church and Harvest Christian Church.

Shaun was born in Howick, Natal, but has called Johannesburg his home since he was seven years old. He works full-time for the band, and also leads worship at Godfirst Church. Craig grew up and studied in Port Elizabeth, until he came to Johannesburg to find work as a Java Developer. Chris has always lived in Johannesburg and is now also working as a Developer. The youngest member, Ashley, also from Johannesburg, is currently studying towards his final year of Law at Wits University. A rather diverse bunch of people, but one thing they all have in common is that they love God and love making music!

How it all began
Craig and Shaun immediately formed a great friendship when they met in 2001, finding that their voices blended very well together. Shaun and Chris met in 2006, when Shaun had a passion to see the church united across denominational barriers through worship. He started up something called Ignite4101, and soon after that, formed a band with Chris and Craig and some other friends.

“It was basically just an evening of worship, and I pulled some of my fellow musicians together to be the band for the events”, says Shaun. “We were just playing worship songs that people would know, but after a while of practicing covers of worship songs, I started to introduce some of my own songs to the band.”

The first song Shaun introduced was “Believe It”. After those Ignite events, the band started working on original music, and made a change in direction from being a ‘worship team’ to being a band.

Joshua Dabrowski (Shaun’s brother-in-law) was also part of ::Harbourlight::’s initial line-up, and played as a keyboardist until early 2011 when he became a proud father. In 2008, the guys met and brought Ashley into ::Harbourlight:: after some of the early members left. They then recorded their first album, started to develop their own identity as a band, and the rest, as they say, is history!

The name
“Coming up with a band name is one of the hardest things a band has to do”, shares Shaun. “We tried to be clever and used the dual meaning of ‘harbour’ – it is both a noun and a verb. So we had the verb ‘harbour’ light; as in: contain light, be a bearer of light, and then we had the analogy of the noun whereby a ship that is lost at sea can find the safety of land by the lights of the harbour. Later, when we looked closer at the verb use of ‘harbour’, we realised that it is really only used in the negative sense, and generally means ‘to conceal’. So, we figured that we don’t want to conceal light, so now we just stick with the noun analogy.”

As far as the dots go, one day Shaun wrote ::Harbourlight:: in an email conversation just for fun. “It looked kind of signature, so we kept it”, explains Shaun. “The dots don’t actually mean anything, but have just become our branding”.

Vision
::Harbourlight::‘s vision is linked to Psalm 24 verse 7: Lift up your heads, o you gates; be lifted up you ancient doors, that the King of glory may come in. “We want our lives and our music to be a vessel through which the King of glory can come in”, they declare. “We are passionate about seeing broken lives restored in His presence, awakened to His glory, and living a life that points others to it.”

“Our music is really just an overflow of what is going on in our lives and what God is doing through it”, says Shaun. “We try to be honest in our music. Life is hard, it really hurts sometimes. Sometimes it really feels like God has abandoned us, sometimes we really mess up and are overwhelmed that God would still calls us His own. This is all stuff that everyone goes through, and this is the stuff our songs come out of – the struggle and the joy. We aim to write songs that can connect with people in the context of real life and draw them closer to the One who makes life complete.”

In terms of their musical style, ::Harbourlight:: say that they make a deliberate effort to not sound “churchy”, but to also proclaim their faith. “We want someone who has never been to church before to be able to enjoy the music, which hopefully opens the door for them to hear the message in the lyrics”, says Shaun.

“We have had amazing feedback from many people about how God has used [our] music to reach them. One song in particular, called ‘Thread’, off the second album, is about a girl who has come to the end of herself. The song is a true story and it seems to strike a chord with many people. There are always tears when we play that song live. We’ve even seen girls walk out after that song, obviously because it has hit them too deeply and they need some space. It may not look like a good thing for people to walk out, but sometimes God needs to reach us where it hurts in order to start healing us, and that’s an amazing thing.”

“That’s what we mean about honesty in our songs – people can’t listen to that song from behind a mask, or put their ‘worship’ mask on and sing as though everything is okay when they feel like they’re in tatters inside”, shares Shaun. “‘Thread’ is a song that God seems to use to put His finger on the tatters. People come undone and break down, and that’s when He says, ‘Finally, now I can get to work’. God needs honesty from us, the ‘real’ us, before He can start healing us.”

“When we glorify God together, often His presence comes, and His presence can change lives. [W]e’ve had a lot of feedback about that too, which is really exciting”, he shares.

Shaun, Craig, Chris and Ashley would all love to be in the band full-time, and really hope for this to become a reality one day.

“But God knows the plans He has for us and we’ll see what He does”, says Shaun. They are currently working on new material. “We are really excited about the new songs”, enthuses Shaun. “At this point we are not sure when we will look to release it”.

“We really hope to come to the Eastern Cape again”, says Shaun, “it’s one of our favourite places we’ve ever played at! Hopefully we get an opportunity to come back soon”.