War-stricken, poverty troubled, infrastructure incapacitated and Ebola infected; just a few negative terms to describe Liberia, but the sun and The Son also shine in this beautiful country. 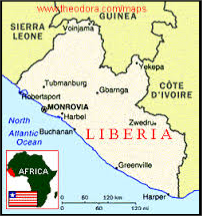 A short background to my relationship with Liberia: I volunteer for the Pointman Leadership Institute [an organisation that provides ethics and character-based leadership  training  around the world] and have served  with them in several African countries — mostly Liberia. Since 2007 I have been to Liberia on five occasions. In July 2014 I returned from my most recent trip, a very blessed outreach since several people accepted the Lord as saviour.

Liberia is blessed with amazing women, including President Ellen Johnson Sirleaf, who have risen up to rebuild the country. None of these women is more  inspiring than Christine Tolbert Norman. We had the privilege to stay in a house at the Norman Compound in Paynesville, Monrovia.

In 1980 William R Tolbert, the President of Liberia was killed by Samuel Doe who led a bloody coup. Tolbert’s family, including his daughter, Christine, were captured and persecuted. Christine later fled to Sierra Leone and the USA. She was a teacher in neighbouring Sierra Leone when the bloody civil war ended in 2004. She then returned to her native country and exuberantly participated in the restoration process.

This influential woman works with different organisations in different countries.  She established REAP (Restoration of Educational Advancement Programmes) which serves to counter the impact of the civil war on education through denying schooling to two generations. She has established schools and training facilities with external funding, since the country just does not have the resources to provide this currently.

She is also in partnership with Samaritan’s Purse, a Christian humanitarian organisation (Dr Kent Brantly, who miraculously recovered from Ebola last week, works for them)

I had the privilege to see her working relentlessly and extremely long hours. This 70+ woman leaves her home early every morning except on Sundays when she will be found at the Zion Praise Baptist Church. She always arrives back home long after supper and will then sit on the porch scanning her emails on her laptop and attending to urgent matters.

In between she goes to the USA to get medical assistance for her fight against cancer.

Did I mention that she is also on the board of directors of Echo Bank and she is also the Mayor of her city.

I consider it an honour to know her, an honour to serve her and her people and trust that the good Lord will grant me more opportunities to learn from her. However currently Ebola serves as an  obstacle for immediate future outreaches.