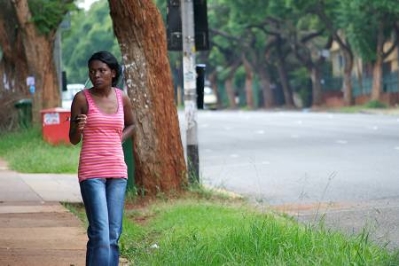 The odors of liquor, smoke and sweat permeate the air. One small bulb lights the alleyway. Traffic is light on the main road, but this side street stays busy.

“Mister!” a young woman yells to a car driving past. “You’re the daddy! I’m your little girl and I got what you want right here!” Another woman hides in the shadows, quietly crying. The pimps’ laughter rises as they share jokes while smoking and playing cards.

Two young women share a bottle of alcohol to give them courage to approach the cars driving through the side street. A client parks in the shade, waiting for a woman to join him in the backseat. Another client follows a woman into her pimp’s apartment. Thirty minutes later the man leaves.

One after another, the clients pick up the women; somehow there is an endless supply. As one woman leaves, another arrives. Two young women stand in the shadows, hesitant and afraid. Suddenly a pimp approaches and provides them with more drugs. The women begin to sell themselves again.

One afternoon with a pimp in the park changed my perspective. I knew who he was and what he did. He knew nothing about me.

Diallo* was adept at slyly pulling information about my life and passions. I’m not hesitant in sharing my faith, and soon Diallo learned I’m a Christian. Moments later, he invited me to attend church with him.

The scenario is all too common. A strong, handsome young man meets a single woman. He is lively and charming. Best of all, he says he’s a Christian. New to the area and looking for friends, it would be easy for a woman to fall into his grasp. The innocence of the moment soon can turn into a nightmare.

Just one prearranged meeting is all he needs. An unopened drink that’s already been drugged, a friend or two lying in wait or a short walk down a deserted street. He takes you, arranges for men to rape you, forces you to take drugs and then, once you are under his control, he sells you to someone in another city or country.

Through a fellow Christian in the area who has a ministry to these women, I’ve learned that approximately 90 per cent of the women working the streets of South Africa’s urban centers are trafficked — deceived, taken against their will, sold and transported into slavery.

One of these young women, Lisha*, invited me inside her small, bare apartment — no bigger than a dorm room. The only “furniture” was a blow-up mattress. The dirty kitchenette was dimly lit; dust gathered along the floor. A moment passed before I realized Lisha and I were not alone.

Kaniz* was curled into a ball in the corner of the room, weeping silently. Her pimp had recently purchased her in another South African city. Lisha immediately became Kaniz’s protector, taking her beatings and making sure that only “good” clients picked her up. But Kaniz had just learned she was going to be sold again and separated from Lisha — her only friend.

Lisha and Kaniz desperately want to escape this life of forced prostitution. So why don’t they leave it all behind?

Their lives are not their own.

“[The pimps] just tell you in your face — straight — ‘There’s your house, here’s your wake-up [time], go to the streets next.’ And you can’t say nothing,” Lisha said. “You are far from your [home]. You must go, no matter what, whether you like it or not. It’s by force. And if you don’t want to go, they beat you well. And you still have to go out after they beat you.”

Alcohol and drugs become the only “relief” in their lives. “Heroin is a very complicated drug,” Kaniz said. “You must smoke it so it doesn’t give you time to think about anything important in your life.”

The night after visiting Kaniz and Lisha, I found myself standing in an alley with 13 other women. It was after 10 pm., yet most of them had already been working for more than 12 hours. As always, the pimps were within view. I leaned against the fence, absorbing the sights and sounds of the “business.”

Periodically the women stepped away from the curb to join me at the fence for companionship and conversation. “It’s my birthday,” Najia* said. “You’re the first person I’ve told.”

Little did I know that a few weeks later my Christian friend and I would be helping Najia escape from her pimp to join a drug rehabilitation program. I broke into tears the day I found out that Najia’s pimp — whom she called her boyfriend — convinced her to return to him after six weeks of successful rehab. Her need for love made her vulnerable to the very man who bought her, abused her and forced her to sell her body to others.

Many of these girls have never received genuine love. They desperately need to know the love of Jesus.