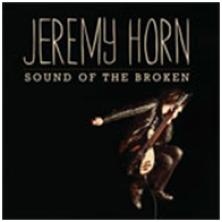 JEREMY HORN — SOUND OF THE BROKEN

1. Sound of the Broken

3. Only God Who Saves

In 2007 Jeremy Horn released his debut CD called “Atmospheres” after which he became the full time worship pastor at ‘Christ The Rock Church’ in Memphis.  In 2010 “We Welcome You In” was released.  2012 saw the release of “Sound Of The Broken”.

This CD has a rock feel that carries through every song, even though one or two songs tempos are slower.  This CD brings a reminder that God lives in all of us broken people and calls us to be His light.  Lyrically he sings solid truth and is rather poetic.  Words like “You are a God with healing in Your hands; You are a God who heals today. You are a God who saves me from my sin; You are the only God who saves” from ‘Only God Who Saves’ is really catchy and uplifting.  One gets the feel that he is not so much into making CD’s for money or fame, but because this is what he is called to do.