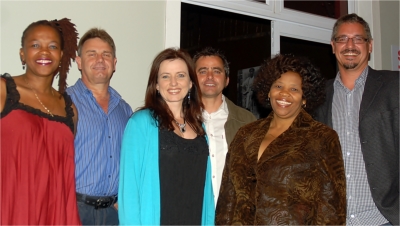 Earlier this week, at a dinner function in trendy Richmond Hill, Port Elizabeth, Kingfisher FM’s new board of directors was announced.

The new board consists of prominent local business-people, some of whom have been coming alongside the radio station for quite some time, hoping to add value as the station grows into a valuable contributor to the heartbeat and spirit of Nelson Mandela Bay and surrounding country towns.

The board has a strong representation of influential businesswomen including Hlubi Hewitt-Coleman, Ruth Jonas, Ningi Goje and Jane Stevenson.

Eben Nel, an advocate, Wouter van der Westhuizen, a business man, and Theunis Pienaar, the station’s general manager, make up the rest of the board members.

‘We’re excited about the opportunity to invest in our little bit of world, through positive local media,’ said the board in a statement.  ‘Kingfisher FM has become a strong brand and we believe the station to be immensely influential.  As a board we’ll focus on building this brand and taking it to the next level.’