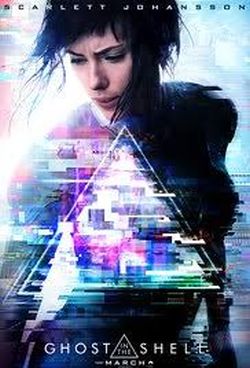 Summary:
Based on the cult Japanese comic this futuristic drama explores a once human, cyber-enhanced soldier built to stop the world’s most dangerous criminals.

Movieguide Review — “Effective, Provocative Science Fiction Thriller”
Ghost in the Shell is a live action, international reboot of the acclaimed 1995 Japanese animated movie developed from a comic book. Updated for the 21st Century, the new movie stars Scarlett Johansson as Major, a young woman whose brain has been encased in a female robot android shell that allows her to track down a mysterious terrorist, who’s murdering high-level members of the Hanka Corp, which provides cyborg technology to humanity, including the government. As such, the movie is effective but could use a little more heart and a better villain. Thankfully, it contains only a limited amount of foul language, but it’s set in a dark, violent world, though the violence is less intense and less disturbing than many other recent PG-13 action movies. The strong moral worldview stresses justice, defends retaining one’s soul and humanity, and has a nice mother-daughter subplot during the second half, but it’s marred by a light revenge motif that taints the justice theme.

Consequently, this Ghost in the Shell has a strong moral worldview with some redemptive qualities. It includes the aforementioned, uplifting mother-daughter subplot. Also, the good guys are willing to risk their lives and even sacrifice their lives for their partners. Furthermore, the movie has a strong patriotic or Pro-American motif where Major’s special police unit is tasked with fighting cyber terrorism, promoting justice in society and protecting people from harmful uses of technology, including people who try to hack into other people’s cyborg enhancements. As such, the unit opposes any attempt, especially criminal attempts, to subvert cyborg technology out of greed or totalitarian interests.

That said, although the violence isn’t super-gory, there are moments where the cyborg characters damage their cyborg body parts or lose a cyborg arm or leg. Ghost in the Shell also suffers from a high body count. Many bad guys are shot dead or killed, and one good guy is shot dead in the head. Some of the violence and cyborg enhancements will be scary for sensitive moviegoers, especially children. Finally, the heroine’s hard cyborg body is flesh-coloured with multiple parts showing edges. So, it’s sometimes almost like she’s nude. Other times, when she does wear clothes, it looks like her cyborg body is covered with a realistic artificial skin, which doesn’t make sense considering the other images of her cyborg body parts. Either way, however, the nudity isn’t really explicit.

Overall, Movieguide® advises strong or extreme caution regarding Ghost in the Shell. — www.movieguide.org