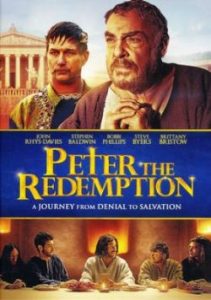 Synopsis
Tormented by his denial of Christ, Peter spent his life attempting to atone for his failures. Now as he faces certain death at the hand of Nero, will he falter again, will his weakness betray him, or will he rise up triumphant in his final moment?

Dove Review
Peter – The Redemption is an inspiring and dramatic telling of Peter’s imprisonment and eventual death for witnessing for Christ. John Rhys-Davies gives a superb performance as the matured and bold Peter, a man with a deep conviction, who convinces others that Christ did indeed rise from the dead. A follower of Jesus, Susanna (Brittany Bristow), continues to witness to a Roman guard named Martinian (Steve Byers), who is against Nero’s desire to kill Christians. The aforementioned actors give an excellent performance, and so does Stephen Baldwin, who plays Nero. He gives the Emperor a calm but lethal exterior and character.

The movie has an authentic feel with the clothing and sets matching the time period. The message is easy to understand, as the film shows that following Jesus and witnessing for him will result in eternal life but may result in persecution. We are pleased to award this film our “Faith-Friendly” Seal for ages 12-plus. This powerful drama conveys a stirring message. – www.dove.org 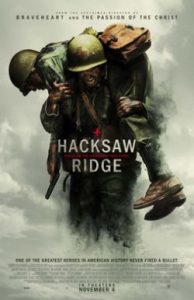 Summary:
WWII American Army Medic Desmond T. Doss, who served during the Battle of Okinawa, refuses to kill people and becomes the first Conscientious Objector in American history to be awarded the Medal of Honour.

Dove Review
Hacksaw Ridge is a faith-based movie that features a powerful message, a gripping performance from Andrew Garfield as Desmond T Doss, as well as dynamic directing from Mel Gibson. The movie is based on the true story of Doss, who refused to learn to handle a gun during his basic training during World War II, but saved 75 American lives as a medic. Much of his actions included finding soldiers after battle and lowering them to safety on a rope in order for them to receive the medical care they needed. He is mocked and ridiculed at the beginning for taking on the role of conscientious objector and refusing to kill others. He is tagged a coward, but at least two men that believe that tell him later on, “I was wrong,” and he gains the respect of his entire unit. His commitment to his faith, as he often reads his Bible, is commendable. Included in the movie is the story of Doss meeting a young woman named Dorothy (Teresa Palmer), and their subsequent romance, with her telling him after he joins the Army, “You come home to me.”

The movie, in addition, features some nice writing and dialog including this comment: “During times of peace, sons bury their fathers; during times of war, fathers bury their sons.” Also, in another scene, Doss rescues an injured soldier, while praying, “Lord, give me just one more,” only to repeat this prayer and his demonstrations of heroic deeds time and again. It is a moving and integral part of the theme of the film. He is devoted to God and cares about his fellow man.

However, due to very graphic scenes of war violence, as well as rear male nudity, we are awarding the film our Faith-Based Seal, meaning it has a strong faith message but contains some objectionable content. For those that wish to watch this film for its true story of heroism and devotion to God, the message comes through. Desmond T Doss believed God was with him and the men, even in war. And he lived like it. – www.dove.org