This week in partnership with CMD Entertainment Africa we will give away a copy of the BROKEN DVD. To be in the running please share this story on Facebook, or tweet it and email news@gatewaynews.co.za with the subject BROKEN and include your name, postal address, email address and cell number. The winner will be drawn on Wednesday November 2.

BROKEN
MOVIE TRAILER & MORE INFO: https://www.youtube.com/watch?v=CFMMpE6Xidg&feature=youtu.be
FOR AGES 12 AND OVER. SOME CONTENT MAY BE OBJECTIONABLE

Synopsis: A powerful movie for teens — 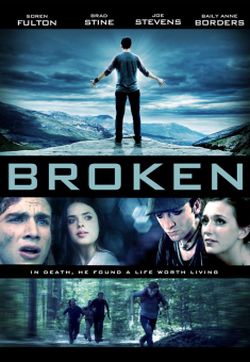 John is clinging to life by a thread. He’s at the bottom of a hundred-foot cliff recounting the events that got him to this point of complete brokenness. As his life passes before his eyes we see a troubled kid on a weekend, youth retreat with his friends. It’s there that John gets captured by three escaped convicts, who are hiding out in the vast expanses of the Rocky Mountains. As a result, John must leave behind a troubled past and face the challenge of a lifetime, if he’s to survive.

Dove Review
“Broken” is a gritty and edgy film, which is based on a true story. A troubled young man named John yearns for some attention from his parents, but his dad is always busy with his multi-million-dollar business and his mom has an attitude. She says, for example, that a new church just opening in town is a bad idea and worse than having a brothel. John hangs out with a negative friend, but then one day meets Emma, a pretty young woman, who invites him to church camp. He has no intention of going, but as he keeps thinking of Emma’s joyful face, he decides to give it a try and brings his friend along.

Unfortunately, during the pastor’s sermon at camp, John lets loose with a tirade about all that he has been through and states God hasn’t been there for him. His buddy encourages him to leave, and they do so, with Emma pleading with him to stay. The taxi doesn’t go far, and John decides to get out and think things over. Soon, three escaped convicts are on the same path, and circumstances get worse when John is captured and then has to flee for his life.

The story features some fine moments, including a scene in which one of the convicts attempts to help John. His name is Val, and he became a Christian in prison. However, the leader of the group, a vicious hard-hearted man named Buddy, has no compassion at all and wants ransom money for John. This story about the struggles of life and the search for a deeper spiritual meaning will hit home with many people. The film does contain a few strong scenes of violence as well as onscreen drug use, although the young man who uses drugs becomes a Christian at the end. We are, therefore, awarding the film our Faith Based Seal. It features an inspiring theme: Change is possible! –  www.dove.org 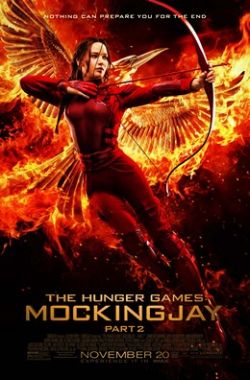 As the war of Panem escalates with the Capitol initiating the destruction of other districts, Katniss Everdeen, the reluctant leader of the rebellion, must bring together an army against President Snow, while all she holds dear hangs in the balance.

Dove Review:
“The Hunger Games: Mockingjay – Part 2” embodies the themes of friendship, loyalty, dedication, and, ultimately, sacrifice. Peeta (Josh Hutcherson) has returned from the Capitol and from the clutches of President Snow (Donald Sutherland). The effects of having been tortured and brainwashed with tracker jacker venom has made Peeta a threat to Katniss (Jennifer Lawrence). Yet, as she speaks with him and spends time with him, he begins to slowly recapture the reality of their relationship. In fact, when he makes a statement here and there, he asks, “Real, or not real?” And she confirms his memory.

The Capitol is determined to wipe out the rebels, and Katniss is just as determined to assassinate President Snow. Ultimately, any victory will require the sacrifice of many lives, and this includes those who are close to the rebels and to Katniss, as well.

This final “Hunger Games” film is the darkest of all of them, but it ends with scenes of hope and the promise of a peaceful life following the reign of the Capitol. We were able to award “Mockingjay Part 1” our Dove Seal, and this film is very similar in its content. It includes death and explosions but very little blood in comparison.
The filmmakers seem to have held back a bit, as in Part 1, in order to gain a larger audience. But make no mistake about it, there are a lot of deaths, including that of the “mutts,” zombie-like creatures with fangs that the rebels have to kill before they are killed. We encourage parents to consult the content listing and to make their own informed decisions.

The themes of sacrifice and dedication are to be commended. The film features excellent acting and a gripping story line as it all builds to the climactic scenes. Powerful figures are involved, and where their true allegiance lies is hard to say. We are pleased to award “Mockingjay Part 2” our Dove “Family-Approved” Seal for ages 12-plus. “Mockingjay Part 2” is a well-crafted film that will satisfy “Hunger Games” fans everywhere, and it brings the films to a fitting conclusion. – www.dove.org