This week in partnership with CMD Entertainment Africa we will give away a copy of the God’s Not Dead 2 DVD. To be in the running please share this story on Facebook, or tweet it and email news@gatewaynews.co.za with the subject God’s Not Dead 2 and include your name, postal address, email address and cell number. The winner will be drawn on Wednesday November 2. 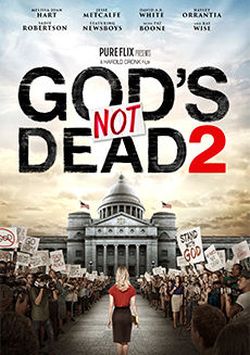 From the college classroom of GOD’S NOT DEAD to the public square in GOD’S NOT DEAD 2, the name of Jesus is welcomed less and less with each passing day. If Christians don’t take a stand today, will we even have a choice tomorrow?

Welcome back to Hope Springs … home not only of Hadleigh University, but also Martin Luther King Jr. High School, where beloved teacher Grace Wesley helps students understand and enjoy history. Her love of teaching, her love for her students, and her love of life all come from the same place: her love of Christ. So when Brooke, a hurting student grieving the loss of her brother, reaches out to Grace, their coffee-shop conversation naturally leads to Grace sharing the hope she finds in Christ.

When Brooke later asks an honest question about Jesus in the classroom, Grace’s reasoned response lands her in big trouble—almost before she even finishes giving her answer.

With the principal and superintendent joining forces with a zealous civil liberties group, Grace faces an epic court case that could cost her the career she loves and expel God from the classroom—and the public square—once and for all!

GOD’S NOT DEAD 2 is the highly anticipated sequel to the beloved Pure Flix movie from 2014 and features an all-star cast. GOD’S NOT DEAD 2 will have audiences standing proudly for what they believe … while they still can. WHERE WILL YOU STAND?

Interview: David A.R. White is Excited about “God’s Not Dead 2”: 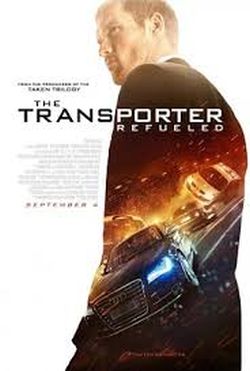 Frank Martin, played by newcomer Ed Skrein, a former special-ops mercenary, is now living a less perilous life — or so he thinks — transporting classified packages for questionable people. When Frank’s father (Ray Stevenson) pays him a visit in the south of France, their father-son bonding weekend takes a turn for the worse. A cunning femme-fatale, Anna (Loan Chabanol), and her three seductive sidekicks convince Frank to orchestrate the bank heist of the century. Frank must use his covert expertise and knowledge of fast cars, fast driving and fast women to outrun a sinister Russian kingpin, and worse than that, he is thrust into a dangerous game of chess with a team of gorgeous women who are out for revenge. From the producers of “Lucy” and the “Taken” trilogy, “The Transporter Refueled” is a fresh personification of the iconic role of Frank Martin, which launches the high-octane franchise into the present-day and introduces it to the next generation of thrill-seekers.

Dove Review:
“The Transporter Refueled” has its entertaining moments, for sure. It is action-packed and places Frank Martin (Ed Skrein) into some amazing situations. In one scene, for example, he and a certain female are in a plane racing down the runway without a pilot, stationed at the center doors opening at the belly of the plane, with their only hope of survival to jump into a racing car beneath them with its top down.

Oh, and they are being shot at as they attempt the jump to safety. It is a jaw-dropping scene. However, you know not to take it all seriously when these kinds of scenes become common, including the two of them driving a car, and fast, inside an airport with fleeing, screaming people, attempting to get out of the way.

A former prostitute named Anna (Loan Chabanol) watched a pimp blow away several of her friends years before when he reclaimed his “territory”. One of the survivors joined him and hopped in his limo. Anna did not. She is out to get revenge and gets Frank Martin (and his father) involved. Frank, a former special-ops mercenary, is a martial artist who takes more than six guys out at one time (as I said, realism is not the priority in this film). Frank’s dad is kidnapped twice which keeps him motivated to help Anna and her female friends in their scheme for revenge.

Although not slow moving in the least, the movie contains strong content in almost all our content categories including the sex, language and violence departments, so we are unable to award the film our Dove Seal. – www.dove.org