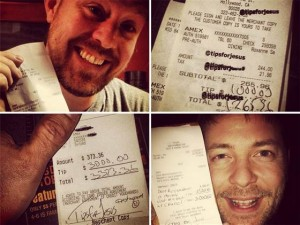 Originally published in All Christian News.com

They haven’t exactly been identified, and it isn’t even known whether or not they are more than one person. But, someone has been travelling all over the US, leaving large amounts of cash as tips for waiters and bartenders. He, or they, leaves the cash with a note: “Tips for Jesus.”

Nguyen, who works at Rouge, a restaurant in Rittenhouse Square, says that she served dinner to two men on Thursday. One of the men ordered one of the restaurant’s burger options while the other went for a cheese plate. When they had finished, the total sum of their meals came to $258 and they paid with an Amex Black Card.

She guessed their ages to be somewhere in the 30′s and also said that while they were eating, they had asked her if she’d ever heard of “Tips for Jesus.”

Nguyen said: “When he wrote down the tip, to be honest with you, it didn’t feel real. I feel like I won the lottery.”

The mysterious diners also left a $2 000 (R21 000) tip for Sam Trasatti, the bartender at the restaurant. She said that the men talked about “Tips for Jesus” while they ran up a $150 bar tab.

“They said they travel the country and do this in the name of Jesus; that this is something they do and they are just spreading goodwill and we are so lucky they came to Rouge,” Trasatti said.

“Tips for Jesus” have been reported to have given money in Indiana, San Francisco, Hollywood, Chicago, Utah and many other places.