More in Australia and New Zealand: 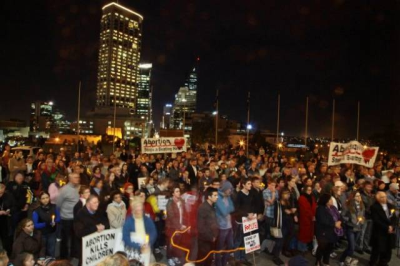 Upwards of 900 people attended Western Australia capital city Perth’s annual Rally For Life this week, meeting on an adjoining lawn before rallying at the steps of parliament house.

The rally is organised by Coalition for Defence of Human Life and has been held every year since the legalisation of abortion in Western Australia in 1998. This was the 15th anniversary rally.

This year the event started with an adult reading a scripture passage for each year since abortion was legalised in Western Australia, accompanied by a child who was born in that year. At least one of these children was saved from being possibly aborted, having been helped by a crisis pregnancy centre in Perth.

Signatures
Rally organiser Richard Egan said that at the rally they collected 590 signatures urging the Western Austrlia parliament “to inquire in to the fourteen reported cases of babies born alive following an abortion procedure – none of whom were resuscitated or given any medical treatment.”

“The Minister for Health has (so far) refused to provide any details of these incidences,” Egan said. “It is unclear if any of these children would have survived if given appropriate treatment.”

The Health Minister Hon. Dr Kim Desmond Hames voted for the current abortion legislation when it was introduced in 1998.

Many members of parliament attended and spoke at the rally, including four members each from both of the major political parties.

The rally has its own award that seeks to honour pro-life activists in Australia. This year Brian Peachey received the Von Galen Bonhoeffer Award for outstanding leadership in the pro-life cause. Mr Peachey was a co-founder of Coalition for the Defence of Human Life, the “Pregnancy Assistance” crisis pregnancy centre, and also established Miriam House, which provides accommodation for women with a crisis pregnancy.

Numbers have increased particularly in the last few years as the rally moved from daytime to a night-time rally. Organisers are expecting to break past the 1 000 mark for attendance at next year’s rally and are encouraged by the numbers of young people getting involved in the pro-life movement.

Mother of three, Karina van Vliet, attended the rally despite having already driven an hour each way to Perth and back earlier that day. “Even though it’s a two hour round trip and I have three children in tow, it’s worth going because it’s important to make a stand for life,” she told LifeSiteNews.com.