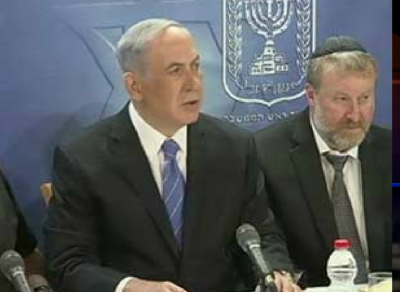 Israeli Prime Minister Benjamin Netanyahu addressed the nation Wednesday evening for the first time since the Egyptian-mediated open-ended ceasefire took effect 24 hours earlier.   CBN News reports that the Israelie government has already come under fire from Israelis and politicians for not going far enough in the battle against Hamas, but Netanyahu said despite all the blather from Hamas, Israel dealt a heavy blow to the terrorist organisation. Flanked by Defence Minister Moshe Ya’alon and IDF Chief of Staff Lt.-Gen. Benny Gantz, the prime minister explained why he believes Operation Protective Edge met its two primary goals: to decimate the terror infrastructure in the Gaza Strip as much as possible and to achieve long-term quiet for Israel. “I can say that Hamas was indeed hit hard,” Netanyahu said. As to whether the quiet will last, it’s too early to tell, he said. But Israel is prepared for “all possibilities” and will respond more harshly than ever to even a “drizzle” of rockets. Despite the raucous victory celebration in Gaza City Tuesday evening, Hamas walked away from the ceasefire agreement virtually empty handed, failing to achieve any of its goals, Netanyahu told Israelis in the televised speech. Outside of Egypt agreeing to open the Rafah border crossing, Israel agreeing to transfer building material and extend the boundary for Gaza fisherman, none of its earlier demands were met, he said. “There is no connection between reality and the celebrations in Gaza,” Gen. (ret.) Amos Gilad told Israel’s Channel 2 news, Arutz Shevareported. Gilad, a member of the Israeli negotiating team in Cairo, said Hamas agreed to the ceasefire because Israel defeated its fighting forces and not for any other reason.  “In the end Hamas did not get anything and agreed to the [ceasefire] deal against its will,” he said. Boasting by Hamas leaders, including Ismail Haniyeh, Mahmoud al-Zahar and Sami Abu Zuhri, who emerged from their hiding places to appear at Tuesday night’s rally, doesn’t change the group’s severely depleted rocket cache, smashed tunnels, or thousands of houses reduced to rubble.  The kidnapping and murder of three Israeli teens and the massive rocket salvos on Israeli citizens sparked the 50-day war that left an estimated 300,000 Gazans homeless. Israel lost 65 soldiers and five civilians in the conflict, including a four-year-old boy. Israel estimated it had killed 1,000 terrorists, including at least three senior Hamas commanders. Gazan civilian casualties, about the same number, were noncombatants, many of whom Hamas apparently deliberately put in harm’s way as fodder for its media campaign against Israel. But despite the usual international backlash against Israel, Hamas suffered such a huge setback that its leaders felt compelled to accept the ceasefire proposal, Gilad said. “Hamas agreed to a [ceasefire] deal because we broke them militarily, not for any other reason,” Gilad said. “In the end, Hamas did not get anything and agreed to the deal against its will.”