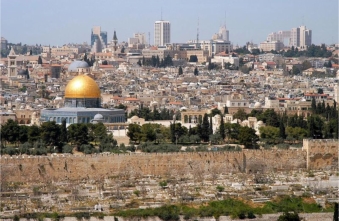 By calling for a “contiguous” Arab state with a border with Jordan, Obama ruled out an Israeli presence in the Jordan Valley. This valley is the eastern corridor through which Arab armies marched into Jerusalem in the wars of 1948 and 1967. Without control of this area and others, Israel simply cannot defend its’ borders. The next war would be fought within Israel itself.

The administration, led by Obama, is denying that this is a change in policy. They point out that the Jewish nation may theoretically be able to “swap” some of its own land in Israel proper to get back some of these Jewish areas. With that kind of logic, no thief has ever really stolen if he offers his victim the chance to swap something else for what was taken.

Obama now has demanded more of Israel than U.N. resolution 242, adopted after the 1967 war. Resolution 242 never mandated that Israel withdraw from the entire disputed territories, much less that Israel “swap” away part of itself.

What’s really going on here? Obama has just signaled the Arab world of his agreement with the Palestinian Arab narrative. That narrative asserts that Israel
stole the territories from them and now Arabs deserve it back as rightful owners. Why else would Obama or anyone pick the pre-1967 borders as the starting point for talks?

Those “borders” were actually only military armistice lines from the 1948 war. They were so indefensible they helped embolden the Arab nations to attack in 1948 and again 18 years later. There is no practical basis for discussing them now, other than to acknowledge the Arab claim.

The Arab assertion of rightful ownership is of course highly selective as to which historical facts and events are ignored and which ones are remembered. In short, the claim is based in historical fabrications. In the mind of most Israelis today the only real basis for an Arab claim is that the area is home to 1.5 million Arabs and only 300,000 Jew. Israelis don’t want to govern Arabs.

One might try to claim that Obama is in fact merely recognizing the demographics. Arabs, he might be saying, should get to govern the land they live on in the disputed territories. But this theory fails to explain why Jews don’t get the same treatment. Under the Obama plan Jews must give their homes to Arabs and be deported back behind the 1967 lines.

The only remaining explanation is that Obama accepts the Arab narrative. We should face up to it: Obama has chosen his side, and it’s not Israel.

This explains the demands he has already made on Israel even before serious talks have restarted. Israel, as the perpetrator, must be pressured to make restitution. Obama therefore forced Israel to freeze Jewish construction, including in its own capital city. Obama also forced Israel to remove many of its security roadblocks that deter terrorists. One result was the brutal murders of five members of the Fogel family, in which local terrorists slashed the throat of a 3-month-old child.

If one still feels that Obama is driven primarily to make peace in the world, rather than by his political ideology, it is instructive to look at what he hasn’t asked of the Arab side. He hasn’t asked them to give up the so called “right of return”—their code words for the demise of Israel as a Jewish state by flooding Israel proper with millions of Arabs, many of them hostile to Jews. He also hasn’t asked Arabs to forget about establishing a sovereign entity in Jerusalem.

Fatah, the political party that Obama would like to govern there, called for renewing terrorist war at their party Congress last August. Fatah also recently formed a government coalition with the terrorists of Hamas. In his speech Obama specifically stated that “right of return” and Jerusalem are legitimate topics for Israel to address.

Will this all matter? In practical terms, Obama’s own policies have greatly reduced his influence with both sides, and killed negotiations anyway. What is important for the future though, is for us to pay much less attention to Obama the politician talking about “unshakable bonds of friendship” and “unwavering commitment,” and to face up to Obama the president with an ideology and an agenda.

Dr. Neil Dobro is the chairperson for Americans Against Terrorism (AAT), a special response group whose purpose is to organize meetings, rallies, demonstrations, and educational pickets in support of America’s and Israel’s joint war against radical Islam and secular Arab terrorism.