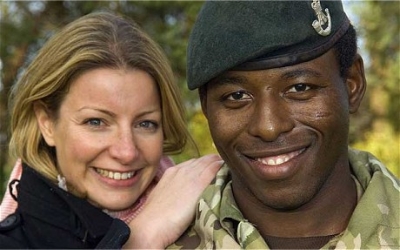 By Paul Kendall – Originally published in The Telegraph

At just after 1.30pm on Thursday, Paul Apowida, a soldier with 1st Battalion The Rifles, marched on to the parade ground at Beachley Barracks, near Chepstow, to receive a campaign medal for his service in Afghanistan.

Fresh off the plane from Helmand province where, as point man, he had led his fellow riflemen across some of the country’s most treacherous terrain, Apowida was wearing his Army fatigues and a green beret, proudly displaying the cap badge of the battalion.

Not required – after a six-month-long tour – were three other things that had kept him safe: body armour, his rosary beads and his Bible.

“I took my rosary with me every time I went out on patrol,” he says when we met after the ceremony. “My rosary, my Bible and a picture of Jesus in my helmet. And, every time, at the end of a patrol, I thanked God for bringing me and my mates back safely.”

By all accounts, Apowida is a popular member of his platoon. Second Lieut Mark Willis, the 26-year-old’s platoon commander, describes him as an “outstanding soldier”.

“He led from the front throughout the tour and kept up the morale of others,” says 2nd Lieut Willis. “He’s always got a joke or a smile, no matter how hard it gets. But, obviously, when things get serious, he’s a professional rifleman. He’s a very brave individual.”

There are many brave soldiers serving in Afghanistan, but few have a background as unusual as Apowida’s.

Born in a remote village in the semi-arid scrubland of northern Ghana, Apowida’s father died before he was born. When his mother died shortly after giving birth, the baby was considered cursed, deemed a “spirit child” – a child possessed by evil spirits who would bring misfortune on the entire community – and condemned to death by a soothsayer who instructed Apowida’s stepmother to feed him poisonous herbs.

The belief in “spirit children” has a long, dark history in Ghana and, although there are no official statistics, is thought to have led to thousands of deaths.

But Apowida was rescued by a Catholic nun, Sister Jane Naaglosegme, who had been posted to his village to start a care home for “spirit children”. She nursed him back to health – he had already swallowed the herbs, but they had not proved fatal – and, eventually, after two further attempts on Apowida’s life, she sent him to a boarding school 800 miles away, in Tema, just outside the capital, Accra.

Not a natural scholar, he struggled in his classes but then went to art college, where he flourished.

It was at this time, also, that he became the beneficiary of a new charity, AfriKids, set up in 2002 by a young, idealistic woman in her early twenties called Georgie Cohen (now Georgie Fienberg). Fienberg, who had worked with Sister Jane during a gap year in West Africa, had got to know Apowida on her regular trips back to Ghana and funded him through art college.

In his last year of college, Apowida said that his mother had come to him in a dream and told him he should join the British Army. Britain – in the form of AfriKids – had done so much for him, she told him, that he should join to show his gratitude.

Fienberg agreed to become his legal guardian, and he moved to London, where he attended sessions run by British Military Fitness. He joined The Rifles in 2008.

Today, Apowida is an ambassador for AfriKids, one of the three charities The Telegraph is supporting as part of our annual Christmas charity appeal, and its chief figurehead for its campaign to re-educate the population of northern Ghana and consign the belief in spirit children to history.

“It’s a really complex phenomenon,” says Fienberg. “Children whose mothers die in childbirth, or children who are born deformed in some way, are labelled spirit children. [The community] believe that they’re carrying bad spirits and that if you don’t get rid of them, more harm will come.”

In a traditional ceremony, a baby who is thought to be cursed is brought before a soothsayer. A chicken is then sacrificed. If the chicken falls on its front, the child is deemed “normal”; if it falls on its back, with its legs in the air, then the baby is proclaimed a spirit child.

AfriKids has already won the International Service Award for the Defence of Children’s Rights for its work to eradicate the phenomenon. Over the past nine years, it has held workshops with chiefs, “concoction men” (who prepare the poison given to spirit children), district assemblies, women and young people in the Kassena Nankana district of northern Ghana.

In many cases, a nurse will meet a group of village women and give them medical explanations for why babies are born deformed and why so many mothers die in childbirth. Concoction men have been set up with alternative businesses, such as farming, to take away the financial incentive to continue their tradition. The charity has also placed 50 youngsters, previously deemed to be spirit children, back with family members who have seen the error of their ways. They set an example to others.

As does Apowida. As well as being a skilled rifleman in the British Army – an enormous achievement in the eyes of Ghanaians – Apowida is also a talented artist and has become something of a local legend. The sale of his paintings has raised £40,000 for AfriKids, all of which has been ploughed into the charity’s other projects in Ghana.

Due to poverty, malnutrition and bad sanitation, one in nine children dies before their fifth birthday, and many of those that do survive end up begging or working illegally in the area’s poorly regulated gold mines. AfriKids is now focusing its energy on these issues.

“There are children 300 metres down a mine, with sticks of dynamite,” says Fienberg. “We pick the most difficult issues and try and solve them.”

Judging by her track record, there is every chance of success. Thanks to AfriKids, the belief in spirit children has almost been eradicated in Kassena Nankana.

Almost, but not entirely. Next month Apowida is planning to return to Ghana to march the 35 miles from AfriKids HQ in Bolgatanga to his village of Sirigu, and sign a declaration with the district chief to end the spirit child phenomenon for good.

“My plan is to go back and have a word with them. I want to tell them, ‘If I was really a spirit child, then I wouldn’t have done all the good things that I have done. I have proved you wrong.’”