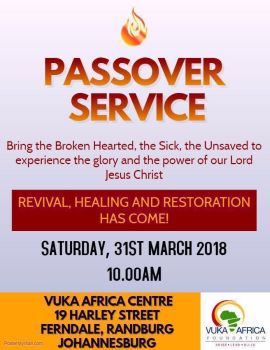 A public Passover revival service will be held at Vuka Africa Centre at 19 Harley Street in Randburg, Johannesburg on Saturday (March 31) to “receive” what people have been praying for on behalf of South Africa, said Apostle Linda Gobodo.

“Bring the broken hearted, the sick and the unsaved to experience the glory of our Lord Jesus Christ. Revival, healing and restoration has come,” says a poster advertising the service, which Gobodo says will launch a regular revival service from April, starting at 6pm on Wednesdays and at 12pm on Saturdays.

“We are believing the Lord for a mighty move of the Spirit,” she said.

She said that after obeying the Lord by praying intensively for revival through December, then daily proclaiming prophetic words over South Africa, and “ushering in God’s government” by participating in the Standing in the Gap conference in Soweto in December/January, she recently “felt the Lord ask: ‘When are you going to receive what you have been praying?'”

“We did all the Lord told us to do by the 31st [of January] all in attendance [at the Soweto conference] knew that in the spiritual realm power has changed hands from the enemy to the kingdom.

“We remembered that our Lord Jesus Christ overcame the devil and took the keys of sin and death to redeem the world of sin.

“During that transaction power changed hands. He announced it to His disciples before He ascended to heaven when He said : ‘All authority has been given to Me in heaven and on earth.’ – Matt 28:18

Reflecting on the Lord’s question about receiving what had been prayed for she said: “I was reminded that Mark 11:24 says: “Therefore I say to you, whatever things you ask when you pray, believe that you receive them, and you will have them.”

“I was prompted to receive all the Lord led us to pray in December. I knew in my heart that revival has come.

“It’s Time in Mitchell’s Plain was another confirmation to me that revival has come.

“Then the question now was if I believe. what am I waiting for?”