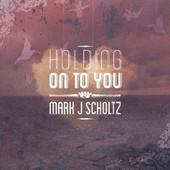 MARK J SCHOLTZ — HOLDING ON TO YOU
Label: Worthwhile Worship

South African pastor/worship leader Scholtz releases his second album, and has enlisted a high-end producer, Dwayne Larring, formerly guitarist and producer for Sonicflood and producer for Tim Hughes. Together they have created a clear, clean and polished album with Larring contributing guitars, bass and backing vocals to several of the tracks.

Disappointingly there are only seven tracks here, of which “Hide Me” is also on his first record, though it is a question of quality over quantity. The opening two tracks are uptempo, dynamic and powerful anthems in the vein of artists such as Hillsong United or Chris Tomlin. They could easily become popular congregational worship anthems if heard by the world Church.

“Your Love” and “Lift Up The Name” are both slow-burners that build to epic conclusions and are both written by keyboardist Paul Buckley, previously of Soul Survivor. Scholtz sings “It’s your glory, that I want the world to see” in the title track, and this attitude comes across clearly in the lyrics.

‘Holding On To You’ is a Jesus-centred, Spirit-filled and powerful worship album. I just wish it was a bit longer.