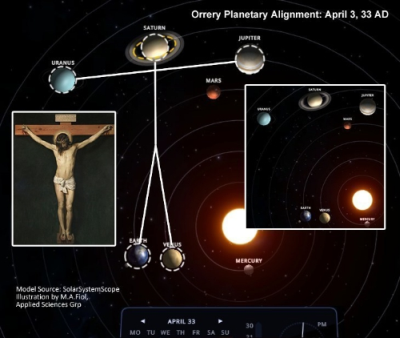 Forget the grilled cheese sandwich or the tree bark bearing the likeness of Jesus of Nazareth, a historical researcher claims to have discovered what appears to be a representation of the crucifixion “in the stars” on the day he is believed to have died.

In an illustration released today (August 27, 2015) to the public, the planets Saturn, Uranus, Jupiter, Earth and Venus align on an orrery model to form what looks like Jesus on the cross with the head, the hands spread out and the legs together in accurate positioning, rotation and on a galactic scale. Indeed, even Saturn’s rings can be viewed as representing the ‘halo’ or ‘crown of thorns.’

Moreover, and perhaps most noteworthy, is the date of the alignment, the day commonly viewed as that of Jesus’ actual crucifixion,April 3, 33 AD.

“More than a few studies have pinpointed that date based on the Bible, calendars, astronomical conditions, even geology,” saysMiguel Antonio Fiol, the researcher who made the discovery.

It was while researching a manuscript that the UW-Madison history grad came across the odd planetary formation using multiple heliocentric orrery models to study the date of Jesus’ death via a top-down view of the solar system.

“Even at first glance I knew it looked like the crucifixion,” he adds. “But it took time to uncover all the incredible parallels.”

Beyond appearing like the crucifixion, Fiol says other notable findings include:

“Those planets rotate as opposites or mirrors, like your left and right hand and your feet,” says Fiol, who spent years researching historical figures, works and symbols such as pi to find patterns and underlying meanings. “It was Da Vinci’s The Last Supper that led me here,” he quips cryptically and without irony.

Fiol claims his findings are easily verifiable yet concedes there will be interpretation, realistic models and bias. “People will see what they want to see though I think coincidence is a hard argument,” he concludes.

“It’s like spotting Jesus on a Reuben or any kind of sandwich, either you see it or you don’t.”