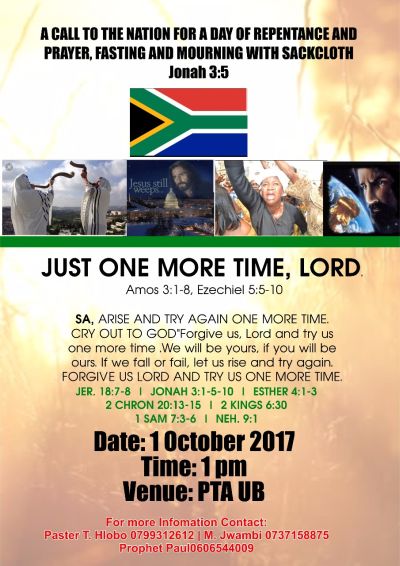 Two significant strategic prayer days — independently called by God in the light of wickedness in the nation — will be taking place at the Union Buildings in Pretoria within days of each other, on Sunday October 1 and Tuesday October 3.

Intercessors from around South Africa will join in a day of urgent repentance and prayer from 1pm to 6pm on Sunday in response to a prophetic call from God to cry out to Him to give the church “one more time” to try and do His will. 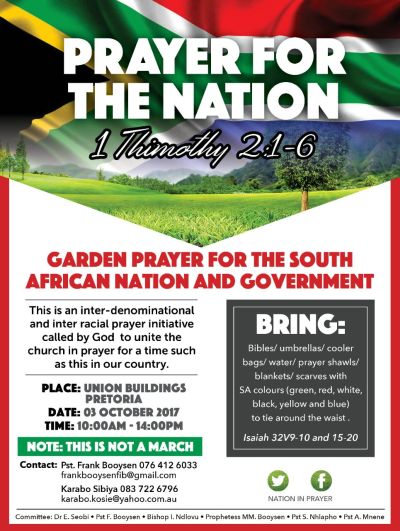 And at the Tuesday prayer initiative from 10am to 2pm, to which everybody is invited, there will be repentance for evil and idolatory, as well as an emphasis on praying for godly leadership in government. Cabinet ministers will be invited and a representative of the President’s Office is expected, said organiser Dr Eva Seobi.

The two repentance events — one focusing on the Church, and one on government — at the seat of South Africa’s government, closely follow another strategically-located time of crying out to God — a travailing intercession event in parliament in Cape Town last Friday, attended by intercessors in Cape Town, some of whom will be at the Union Buildings on Sunday.

Dr Eva Seobi said in an interview today that she believed the Sunday prayer would prepare the ground for the prayer for the nation and government on Tuesday, where she trusted there would be a message from God for government leaders who attended.

The visionary of the Sunday event is Bloemfontein-based missionary from the Congo Paul Mbongelo. Speaking from North West province  — his last stop in a series of trips he has undertaken to share a call to repentance in all nine provinces of South Africa — he said yesterday that the two events would give people more options to pray at a time that they could manage, or to attend both events.

The message that Mbongelo took to the provinces — that God holds the Church responsible for the rise in wickedness in the nation and wants to hear a sincere cry of repentance in order for Him to withhold judgment  — was well-received around the country and at a recent national prayer conference in Bloemfontein. There was discussion about holding a day of repentance at a later date to facilitate planning and enable more people to participate — but Mbongelo insisted that it should happen as soon as possible in order to be obedient to God’s call.

He told Gateway News yesterday that God was prescribing medication to deal with the grave danger facing the nation and it was important to take the medicine as He prescribed and not to mix it in any other way.

He said the priority was not to get a large number of people to the prayer event but rather to gather people who deeply identified with the call and would come with “weeping, crying and groaning”.

Jwambi, who lives in Cape Town, said she heard Mbongelo’s message when he visited the city and immediately connected with it because God had also been speaking to her about the need to cry out to Him.

She said she organised a day of prayer at Kayelitsha Stadium, Cape Town on Saturday, August 5 in response to a word from the Lord in 2016.

She also attended the time of weeping and travailing before God in parliament last Friday, where she said there was a strong sense of God’s presence.

She believed the call to a day of repentance in Pretoria on Sunday was to a specific prophetic intercession required by God “because of something in God’s heart he wants to do for us” to be carried out by intercessors assigned to that task.

“God sees we are in a mess as a country and he wants to save us — but He is waiting for us to cry out and ask for His help,” she said.

Seobi, who leads Women Alive, said the Tuesday prayer event at the Union Buildings was birthed in August as she was preaching at a women’s celebration event, and God dropped into her heart that women were affected by the evils in the nation –including violence, abuse, family dysfunction, corruption in high places, wounded people — and they were called by Him to go as women to the highest office in the land to wail and call on Him to be merciful, and to restore leadership in government.

Since then the event has been expanded to include everybody.

Seobi, whose medical practice is in Duduza, said this week she had a significant conversation with the ANC Speaker of the Gauteng provincial legislature Lentheng Mekgwe who was in the area to share condolences at a school where the deputy principal was murdered by apparent hitmen on Tuesday.

Mekgwe told Seobi that she believed that what the country needed was to pray before God. Seobi said that after the Union Building prayer day she plans to arrange a prayer event in Duduza.

She said the Bible talks of people behaving like animals when they have lost sight of God. She said that was what was happening in the nation where inhuman violent crimes were commonplace.

She believed prayer would help to restore a fear of God and a realisation that He is wanting to influence human history but chooses to do so when we allow Him to.