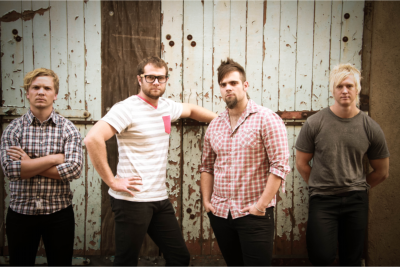 What started as a high school rock band evolved into one of the most influential youth ministries this country has ever seen. When four high school friends; Ryno, Werner, Hendri and Lourens got together to start a rock band they never realised that God had something completely different in store for them; and as their individual relationships with Christ grew the goal of the band went from being self-centred to God-centred. “The more we got to know Jesus, the more we knew we couldn’t keep Him to ourselves.” By the time they hit varsity they decided to put all their focus in the band and the rewards were overwhelming. In 2009 they won the NWU-Pukke Talent Search and proved that One Crown wasn’t just another Christian band but a pretty fine rock machine too.

Grace, awards and cheese
A combination of solid guitar work and energetic drumming mixed in with intense and sincere vocals and lyrics and encompassed by some rock-hard bass lines One Crown produced their first “indie” album titled “Grace” in 2010. Their hard work and sincere attitude towards making a difference paid off because the album got them noticed and signed by major Christian label Merchant Music.  By October 2011 they released the second album and first under the new label titled “Verander Virander”. The album was a raging success and earned the band two prestigious accolades too.  They were awarded a Ghoema in 2012 for best Afrikaans rock album and they won a Huisgenoot Tempo award for the same category in 2012. Both awards came in for the album “Verander Virander” and were a testament to their popularity as both these awards rely on fan votes. Even though awards like these will always be a part of the industry the guys reminisce about something that is way more important to them than the awards; “Even though it is great to win these awards and we are very grateful for them, nothing comes close to the feeling you get when a broken teenager decides to give his life to God.”

One Crown’s deeply profound and honest lyrics have attributed to their popularity and have also proved that Christian music does not need to be cheesy. An unfair stigma follows Christian music especially Afrikaans Christian music that it is cheesy. These guys have gone a long way in proving the contrary. “We believe that as long as we keep it real the “cheese” will stay away. We write about real life issues. We write about the stuff that really matters in life. For us it is difficult to become cheesy when we are writing songs about an all-powerful God. There is absolutely nothing cheesy about God and his love for us. We spend hours and sometime days writing a song;  we try to make the lyrics as real and as relevant as possible.” In a world where most music revolves around the negative and originality goes out the door One Crown’s music is as fresh and original as it is relevant. “We believe that an original positive message is crucial, we live in a society that always focuses on the negative in life. It’s easy to write songs about negative stuff but we believe that what you surround yourself with is what you will become. If we surround ourselves with negative music we will become negative.”

Vulnerable
This proved true again when in 2013 they released their third album titled “Kwesbaar”. “With Kwesbaar we decided to push Afrikaans Christian music to the limit. It is our heaviest work so far. We loved the sound of the album but we also realised that it might be too guitar driven for some. Luckily we have awesome fans and the album has done better than expected thus far.” The first single was the song “Dans”, they teamed up with CANSA to shoot the music video and the result was a phenomenally inspirational video. “The song Dans is about how God wants to be a part of our lives, during the good and the bad. We hooked up with the awesome people from CANSA in making the video. Our aim was to let those who suffer from cancer know that they are not alone.” The video also shows the band parting with their hair in solidarity with cancer victims and I had to ask if it was difficult to do: “It was difficult for some but it was definitely worth it in the end, we have had so many people thanking us for inspiring them through the video.”

They have been together as a band for 10 years now and over time a lot of things have changed. Some of the guys have married and are becoming fathers, but they feel that the changes have only done the band good: “The dynamic of the band has and will definitely continue to change. As we mature we believe that our message will also mature.” Being Christians they feel the importance of their work is spreading the gospel, what is the gospel to One Crown?  “The gospel is the good news of God’s love for us.” The guys enjoy each other’s company and have been known to be quite fun to be around: “We believe that God wants us to enjoy life. Many people have a distorted image of Christians. They believe that Christians are always serious and never have a good time. We want to shake that image by showing that being a Christian is fun. There are however, always a couple of minutes in a One Crown show where we get serious.” Touring as much as they do there will always be some funny stories to share and the band recalls one show in particular where they had to call frontman Hendri aside while onstage to tell him that his fly was open. One Crown remains one of the hardest working bands in the country with one of the most loyal fan bases around; it gives great pleasure to know that they aren’t doing it for their own fame.

For bookings, news, music videos and CD orders you can go to their website www.onecrownband.co.za