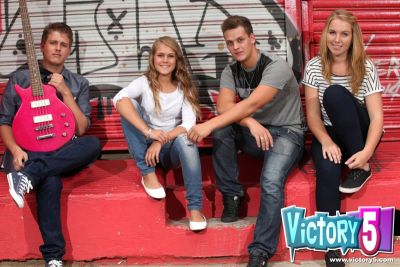 Finding wholesome role models for our kids is near impossible in an age where moral values get chucked out the window in favour of illicit, Miley Cyrus types that just seem to pop up no matter what channels you frequent on your TV. This has been plaguing most, if not all, Christian parents since the banning of Elvis’ pelvic dance moves in the 50s. The visual horror of the ever competing need of these pop stars to “up the ante” has progressively worsened since the dawn of “Elvis the Pelvis”, and good normal looking pop stars with sober habits seem to be a fashion of seasons past. Yet, in steps the bright-eyed and bushy-tailed youngsters from popular Christian teen group Victory5 — five fresh-faced youngsters armed with the message of Jesus and a realistic image for young ones to identify with.

These teens do exist!
You’d be forgiven if you think that these guys come from a generation centuries ago when kids still ate their broccoli, listened to their parents and rinsed their own dishes; I can now confirm however, that these kids do exist. Yup, this is not a publicity stunt and no, you are not on Candid Camera. These teens with Biblical principles, a positive outlook on life and a willingness to be positive role models for our kids are alive and well, and they live right here in South Africa.

Victory5 has been around for the past two years and they have been actively busy with shows from youth groups to music festivals. The concept of Victory5 plays in directly on the Disney genre that has proven to be very popular amongs teens. This, of course, is just minus the weekly scandals and slip-ups that we have grown accustomed to. Due to the ever changing nature of school kids’ lives, Victory5 has undergone a bit of personnel change with two members leaving the group as they approach their final year of schooling. This has opened the door to new possibilities for Victory5 as an ever-changing youth ministry that stays fresh and current.  The members of the group are: Dianke (15), Dillon (17), Justin (15) from Boksburg, and Zoe (12) from Krugersdorp.

The group has had significant success in their first two years of existence and has gained a huge following amongst teens. Kids from 12 years old and on have found them most identifiable and reports have streamed in from across the country of kids requesting Victory5 foot stompers above the usual pop cultured and trashy innuendo that dominates the airwaves on their daily parent supervised commutes to school. Xrossbeat Media Director and Manager for Victory5, Eon De Bruin, says that the biggest compliment he has received so far was from a church youth pastor who told him Victory5 has gotten through to his youth group and connected more with them than he could in a year of preaching.

Their popularity was proven amongst their peers when their debut single “Ek weet wie ek is” gained over 1 000 hits on its first day on YouTube and reached number four on popular Kruiskyk program Impak’s Top Ten chart all before the release of their debut album. Victory5’s debut album has been available for some time now and you owe it to your ears to give it a listen and subtly include it in your carpooling trips with the kids to school or the mall. The fresh-faced kids from Victory5 are not only excellent role models for young kids, but musically gifted too. Their songs are catchy with relatable lyrics.

When I quizzed Eon de Bruin about Victory5’s main aim in the saturated Christian music scene he had the following to say: “Victory5’s aim is to create a positive influence on the youth of South Africa. Not only to be seen as good role models, but also to live the Christian values and morals that they proclaim through their music, lyrics and live performances. We believe that our country needs more than just a ‘positive message’. We believe that our country needs the ‘good message’, and this message is Jesus Christ. We need to let the kids know about His love and His grace, and that there is more to Christianity than simply going to church. These four young role models will show that following Jesus is a passion fuelled by love and that it’s not just going through the same boring motions every day”.

Living in in the information era, it is dangerously easy for our kids to fall prey to the wrong type of influence. We raise our kids to be aware of this, and we pray constantly for their safe keeping. I believe that groups like Victory5 do immense work to build our kids up, show them the Gospel and present themselves as role models. This band is the first of its kind in the country, and they could do with all the support they can get.

You can book Victory5 for your church, music festival or youth group by emailing Eon De Bruin at Xrossbeat@gmail.com