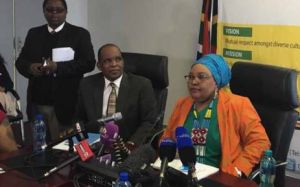 The CRL Rights Commission briefing the media on its report on the commercialisation of religion. The report, which recommends state regulation of religion, was handed to President Jacob Zuma this week. The COGTA parliamentary committee will be meeting on September 13 and 14 to discuss the report. (Picture: Thando Kubheka/EWN).

Freedom of Religion has long been considered to be the most important of all human rights. It was birthed from a recognition that whenever the state interferes with religion, the consequences are inevitably negative and injustice and persecution surely follow.

And secondly, whichever religion is recognised (and thereby supported) by the state, will typically use its favoured position to suppress or silence others who hold dissenting views.

Examples from the Bible and church history
The Bible gives some of the earliest examples of the former scenario being played out. Jeremiah was imprisoned and threatened with death by King Zedekiah of Judah for prophesying that Jerusalem would fall to the Babylonians. Elijah confronted the corruption of his day when he challenged King Ahab and Jezebel for murdering Naboth and taking his vineyard, and was hounded and persecuted as a result. Shadrach, Meshach and Abednego were three young Hebrews who were thrown into a fiery furnace for refusing to worship an idolatrous image set up by King Nebuchadnezzar. John the Baptist was imprisoned and subsequently beheaded for challenging King Herod Antipas for his incestuous relationship with his brother’s wife.

While it is unanimously agreed that the CRL has identified unacceptable (and indeed) criminal abuses perpetrated by a tiny fringe minority of sects, their proposed solution to place all religion under their control has rightly been called “unnecessary, unworkable and unconstitutional”.

The arrest and crucifixion of the Lord Jesus is perhaps the clearest example of the lethal combination that can result when a specific religious community has the support of the state. A major aspect of Jesus’s ministry was His challenge to the prevailing religious order, epitomised by the Pharisees and the Sadducees. He was openly critical of their historic control of religion and, from an early stage of His ministry, they were actively looking for ways to kill Him. When He was finally betrayed by Judas Iscariot, the party who came to arrest Him in the Garden of Gethsemane was a combination of the chief priests, elders and officers of the temple guard. It was the political decision of Pontius Pilate that resulted in the sentence to scourge and crucify Jesus, despite the fact that He was proclaimed innocent. The first martyr Stephen, stoned to death for his proclamation of Jesus Christ as Lord, declared the pattern of history repeating itself when he asked : Was there ever a prophet your ancestors did not persecute? — Acts 7:52

Throughout history, this same pattern can be clearly seen. The Catholic Church, backed by the power of the various states, ruthlessly persecuted believers of the emerging Protestant faith. The Lutherans, themselves subject to persecution from the Catholics, were equally ruthless in their persecution of the Anabaptists once they had gained political support. In England, the Protestant faith was bolstered following the decision of Henry VIII to break with Rome and to establish the Church of England, with the monarch as its head. Yet, this same church resisted reform from the Puritans, who sailed from England on the Mayflower to escape persecution and regulation of their religion by the state and established the Massachusetts Bay Colony. However, it was these same Puritans who subsequently used the power of the government they had established to persecute and even execute members of the Quaker faith. Significantly, October 27 has been declared as International Religious Freedom Day and it commemorates the very date when these Quakers were put to death.

A threat to the voice of the church in SA
It is for this primary reason that the attempt by the CRL Rights Commission (CRL) — who, in terms of chapter 9 of the constitution, is an institution of state and whose commissioners are appointed by the president as head of the state — to license (and thereby control) every religious practitioner and place of worship in South Africa, is viewed with such suspicion.

While it is unanimously agreed that the CRL has identified unacceptable (and indeed) criminal abuses perpetrated by a tiny fringe minority of sects, their proposed solution to place all religion under their control has rightly been called “unnecessary, unworkable and unconstitutional”.

As soon as the state becomes — in the words of the CRL’s final report — “the final arbiter of religion” and that “the final decision powers shall lie with the CRL Rights Commission”, alarm bells should be ringing loudly. While their intention to intervene might start as benign, there is absolutely no guarantee that it will not quickly turn cancerous.

The State will effectively have the power to silence or control any church or faith leader who teaches on matters which are deemed “unacceptable” by the State.

A cursory examination of Russia tells a modern story, enjoying a short but significant season of religious freedom following the fall of Communism, but now reverting to strict state control where the public teaching and preaching of the Gospel is effectively prohibited.

Likewise, should the state (through the CRL) be allowed to assume control over religion in South Africa, the prophetic voice of the church and her ability to freely preach and teach the full counsel of God, could be in danger.

The state will effectively have the power to silence or control any church or faith leader who teaches on matters which are deemed unacceptable by the state.

This is especially concerning in light of global shifts in morality and ethics around matters such as corruption, marriage, same-sex and transgender issues, family roles, etc.

George Santayana, the famous Spanish philosopher and novelist, once said: “Those who cannot learn from history are doomed to repeat it”.

In South Africa, the religious sector has long been self-regulated and both legislators and the courts have been wary to interfere, especially in areas which touch on religious doctrine.

Yet, the CRL’s proposals will fundamentally upend this existing relationship if allowed to proceed to legislation which will empower them to roll out their agenda. It is therefore time for the Church and all faith groups in this country to seize this moment to make our voices clearly heard and to say a resounding “No!” to state control of religion.