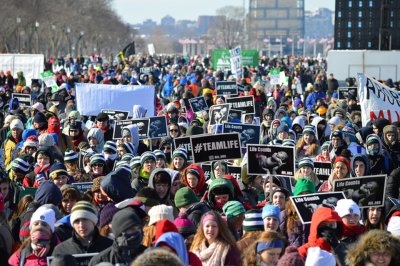 Tens of thousands of pro-life activists endured frigid temperatures and a snow storm Wednesday as they gathered at the National Mall in Washington, DC, to mark the 41st anniversary of the landmark Roe v. Wade ruling that has prepared the way for an estimated 56 million abortions.

In past years the march has drawn crowds estimated between 400 000 and 650 000. However, the winter storm that blew through Washington on Tuesday led to cancellations of numerous buses and planes, creating a visible drop in numbers at this year’s rally and march. The Philadelphia archdiocese, for instance, canceled all of their buses.

Famed Christian singer and songwriter Matt Maher was scheduled to lead music for a half hour before the rally, but his slot was cancelled because of the weather. Instead he opened and closed the rally beginning at noon.

Taking the stage to welcome the marchers shortly after noon, March for Life organizers insisted pro-lifers wouldn’t be daunted by the frigid weather in DC. “We may be freezing, but we’re freezing for the best cause in the world,” said Patrick Kelly, chairman of the March for Life Education and Defense Fund. “No sacrifice is too great for this cause,” said Jeanne Monahan, the group’s newly minted president.

“Your faces are cold but your hearts are on fire, right?” Dr. James Dobson, founder of Focus on the Family, asked the crowd. He related that in 1973 he was driving home on the freeway when he learned of the Roe v. Wade decision. “I grieved over it because I knew it meant millions of babies would die,” he said. “Who would’ve known it would be 56 million by this point 41 years later?”

Telling the story of a couple he counselled to choose life for their child, he told the crowd, “I say to you, if you’re facing a similar situation, … let your baby live!” He then marvelled at the youth of the crowd. “Look at the young people who are here!” he said. “You are the hope of the future and together we’re going to win this fight!”

Majority Leader Eric Cantor, R-VA, who changed his flight to Israel to attend the March, thanked those present for “braving these unbelievably cold temperatures” and “giving voice to our cause of protecting life.” “I believe that one day in the not too distance future our movement will be victorious because we will prevail in securing a culture of life,” he said.

“You are our movement’s not-so-secret weapon,” he added. “Those of us in public office are merely fortunate to stand on your shoulders.”

The majority leader also announced that next week, the House of Representatives “will vote once and for all to end taxpayer funding for abortions.”

Vicky Hartzler, R-MO, told marchers, “We are here today to remember the millions of lives devastated with abortion and to pledge ourselves anew to upholding the most fundamental” right, “the right to life.”

Noting there are 1.2 million abortion per year in the US, she said, “There are more babies who perish each year through abortion than people who live in an entire congressional district.”

An adoptive mother, Hartzler said, “Every life is valuable and has a god ordained purpose. All babies are wanted.”

Giovanna Romero of Latinas por la Vida told marchers that blacks and Hispanics are “systematically targeted by the culture of death.” “Who is with me to fight the good fight?” she asked. “We are the pro-life generation and we will make a mark in history. … We will make an end to abortion!”

Donna Harrison, executive director of the American Association of Pro-Life Ob/Gyns, said the front lines of the abortion battle are changing. It’s no longer the clinic and the hospital, but the dorm room and campus clinic because of the promotion of emergency contraceptive drugs, which act as abortifacients. She told the youth, “you’ve now become the frontline in the battle against abortion.”

After the noon rally on the Mall, participants marched to the Supreme Court, where post-abortion men and women from the Silent No More Awareness Campaign shared their testimony.

The rally schedule was shortened today because of the cold, with temperatures hovering around zero, the marchers are undaunted.

In a homily at Washington’s National Shrine of the Immaculate Conception Tuesday evening, Cardinal Sean O’Malley said the cold weather is “just perfect, because the colder it is the better our witness. They will know we are serious. That is why we are here.”

“We absolutely will go on tomorrow. The March has never been canceled because of extreme temperatures, and it won’t be canceled tomorrow for that reason,” Jeanne Monahan, president of the March for Life Education and Defense Fund, told the Law of Life Summit on Tuesday.

March organizers highlighted the fact that members of both parties spoke, although Republicans made a stronger showing. The Republican National Committee has said they are delaying their annual winter meeting for the March this year and have chartered a bus to bring legislators to the Mall.

The theme for this year’s march is adoption, which Monahan called a “heroic decision” for women in crisis pregnancies. “We want to eliminate the stigma of adoption and encourage women to pursue this noble option,” she said in a press release.

The March for Life organizers are encouraging Twitter users to use the hashtags #whywemarch and #marchforlife throughout the day.