Saturday, November 15, 2014 marked a new beginning for the city of JOYburg as joy activist and laughter coach Sue Jameson got to launch her city rebranding campaign with her ‘My #First Laughter Mob’ which was her prize for winning the Vodacom #Firsts competition.

Sue says her dream was made a reality by a world class production team, comprising a producer and directors from London, UK, and a 20 strong crew in SA. No expense was spared to ensure that this was a day that would resound in history. The next phase of her prize will be a documentary which will stand witness for all the world to see… JOYburg as the ‘City of Joy’! 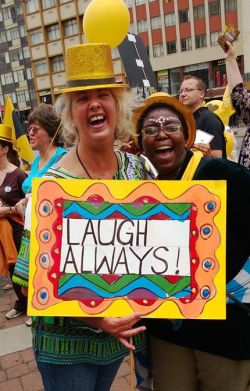 The wonderful venue was The Sheds @ 1Fox Street, says Sue. It was here that Hubert Davies opened mining warehouses in 1893 and where Joburg’s first miners pitched their tents during the gold rush. The aim in JOYburg is city transformation and a key is “calling out the gold” in the beautiful people of the city. It was perfect to start another gold rush from this significant location… with this brave new initiative.

The excitement was palpable as the laughter team began to arrive on Saturday morning. Many were dressed in gold, and young and old had their faces painted as the crew finalised their set up. At ‘go-time’ Jameson stood up on a table and began to laugh… and her 150 joy bringers stood and joined her as they released the sound of joy and laughter over the city.

After speeches it was time for the joy procession through the streets of JOYburg. A brass band led the way, together with dancers and drummers… and the marchers waved gold JOYburg flags and carried gold balloons to hand out. Placards with positive messages were carried… ‘Love Wins!’ ‘Peace Rules!’ ‘Choose Joy!’ ‘Laugh Always’ and ‘I LOVE JOYburg’ banners were proudly displayed. JOYburg Manifestos were handed out to the watching public and many of them joined the procession. It was a joyful time of song and dance, and many lives were touched.

One of the participants, Ingrid Pepler, had this to say: “I saw so many faces light up as the mob of laughing, smiling super stars reached out and touched their hearts. I saw frowns vanish and smiles appear. I saw people reaching out and loving everybody in sight. I agree, this is undeniably the start of a revolution that will make JOYburg a beacon of light to the rest of the world — or maybe even the rest of the universe!”

Double rainbow
Jameson explains that the entire adventure has been miraculous, and the miracles continued on Saturday. She said, “Having watched the weather for 10 days, I was not surprised when the clouds built up, the wind blew and the rain began to pour on Saturday morning! However, I was convinced that it would all be fine. My faith is in the One Who is always faithful… and His hand has been on this journey since day one. A song rang in my head… ‘I’ll march my band out, I’ll beat my drum… don’t bring around a cloud to rain on my parade!’ As we drove to 1Fox, the city was shrouded in dark clouds and rain… but as we got closer, the rain subsided and had stopped completely when we parked. The day was absolutely perfect, and then later the clouds built up again… and as I got into my car at 4pm to leave, the rain began – and simply poured down. Less than an hour later, there was a beautiful double rainbow over the city! He who promised is faithful. YAY GOD!” 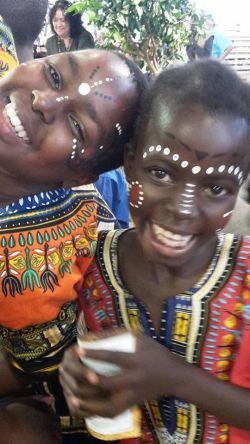 In the meantime, Jameson continues her work, introducing people to the transforming power of joy and laughter through her Dynamic Living Programme. Stress is the No 1 killer in the world and she says that laughter is the greatest weapon we have against this enemy. She is determined to extend the reach of the programme with many more corporates, government departments, churches and various other groups, and her aim is to build partnerships to run workshops in every school, hospital, police station, care giving and other stressed groups. Ultimately, as they invest in the wellbeing of their staff, through this transformational programme, she plans to reward organisations with the ‘JOYburg stamp of approval’.

Jameson expressed her thanks to Vodacom for the amazing #Firsts competition, and to the incredible production team. She also wants to thank all who participated, supported, voted, prayed, and loved her through the journey. She said, “This prize is for each of you… and for all the people of our beautiful city. The #JOYburg Revolution has truly begun!”

You can play your part by adding your voice and calling the city JOYburg – and remembering to hashtag #JOYburg in all your social media. For more information about the programme or partnering with JOYburg, or to book a workshop for your organisation, please fill in the contact form via www.joyburg.co.za.