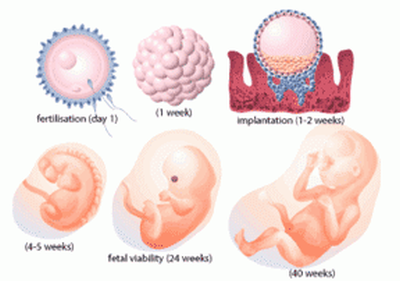 The moral status of the embryo is one of the key pressure-points in ethical debates about post-coital contraception, therapeutic cloning, pre-implantation diagnosis, artificial reproduction, embryo research and cloning.

The issue, which has profound implications for medical practice as doctors, has divided people for centuries and remains controversial.

It is a fundamental principle both of Christian teaching and also of natural justice that human beings deserve utmost respect.

Christian view on worth of human beings
Christians believe that human beings have been individually created by God and derive their integrity and worth from the fact that they are made in the image of God – regardless of genotype, age, size, location or degree of dependence and disability.

The presence of a disability, either inherited or acquired, does not detract from a person ‘s intrinsic worth. All human beings are thereby worthy of the utmost respect. They must never be treated as means to an end. At the heart of the Christian ethic is self-giving love, whereby the strong make sacrifices for, and if necessary lay down their lives for, the weak.

Historical medical ethical codes, recognising the power and strength of doctors, have enshrined a view similar to the Christian one.

The Declaration of Geneva (1948) stipulates that doctors should ‘maintain the utmost respect for human life from the time of conception’.

In like manner, the International Code of Medical Ethics (1949)says that a doctor ‘must always bear in mind the obligation of preserving human life from the time of conception until death’.

The Declaration of Helsinki (1975) says that in biomedical research: ‘the interest of science and society should never take precedence over considerations related to the well-being of the subject ‘.’In any research upon human beings,each potential subject should be adequately informed of the aims,methods, anticipated benefits and potential hazards for the study…’and ‘the subjects should be volunteers ‘. ‘It is the duty of the doctor to remain the protector of the life and health of that person on whom biomedical research is being carried out.’

By contrast the emerging view amongst contemporary ethicists (such as Peter Singer) is that human beings are nothing but the product of matter, chance and time; merely highly specialised animals.

The value of individual human beings is determined by their level of rationality or self-consciousness, physical attributes or capacity for relationship. Human life that has fewer of these qualities is of less value and can be disposed of. This ‘Darwinian ethic ‘with its aim of ‘survival of the fittest ‘places the demented, mentally handicapped, brain-injured and unborn (particularly the human embryo) in great danger.

The Human Fertilisation and Embryology Act (HFE Act) starts with a presupposition that has never been properly established – that the human embryo is not a human being with rights, and can therefore be treated as a means to an end.

In keeping with this foundation the Act sanctions embryo freezing, research and destruction along with abortifacient contraception and the disposal of abnormal embryos after genetic testing -practices that we would not countenance for human beings at any other stage of development.

Any biology textbook tells us that human development is a continuous process beginning with fertilisation; essentially the only differences between zygote and full term baby are nutrition and time.

Philosophers, biologists, politicians and even theologians, however, have advanced arguments to undermine the status of the human embryo.

Three views on status of human embryo
Here are three of the main ones with my responses:

1. Human embryos are not human beings worthy of respect because they lack rationality or capacity for relationship

This was the thinking behind the Warnock Committee’s recommendation of no embryo research beyond 14 days, as the neural crests first form 10 days after fertilisation. Others have suggested that breathing movements (12 weeks), or ‘quickening’ (20 weeks), or even the first breath of air should be the end point. It has even been argued that newborn babies are not persons since they lack ‘self-awareness’.

But the development of the nervous system is a continuous process beginning at fertilisation and choosing an arbitrary point on this continuum discriminates between human lives on the basis of neural function. It is therefore ‘neuralist ‘. Neuralism varies from racism and sexism only on the basis of the non-morally significant quality selected as the basis for discrimination. It is simply another form of ageism.

Our value as human beings does not consist in our capacities or attributes but in the fact that we are human. Arguing that the value of any human life depends on its place of residence (uterus, fallopian tube or petri dish) or degree of independence similarly discriminates on the basis of non-morally significant characteristics.

2. Human embryos are not human beings worthy of respect because they have a high mortality; about 40-70% don’t reach maturity

But the value of human beings is not contingent on their survival rates. We don’t say that refugees in Africa, flood victims in Asia or people with cancer are less important simply because they have a high mortality.

Similarly, if survival rates at any stage of development are low this does not justify us actively ending life. The general strategy of medicine is rather to save and preserve life. The figure of 40-70%may well be an overestimate anyway. No one really knows how many early embryos die as there is no biochemical marker for fertilisation, as opposed to implantation.

3. Human embryos are not human beings worthy of respect because many embryos that do spontaneously abort have a high incidence of genetic (particularly chromosomal) abnormality

But all of these abnormal embryos have formed from the union of two human gametes. Aren’t they therefore just human lives with severe disabilities, human lives with special needs? We would not argue in any other sphere that the value of any individual human life was contingent on how ‘normal’ it was; far less that abnormality justified killing by ‘disposal ‘.

Conclusions
The arguments used for devaluing the status of the human embryo are both unconvincing and discriminatory. The human embryo should instead be given the benefit of any doubt regarding its status.

We have a choice: we either act to ensure the protection and survival of the most vulnerable members of our society by endorsing the Christian ethic of the strong making sacrifices for the weak; or we continue to ensure the ‘non-survival of the weakest’ by politicising the ‘Darwinian ethic ‘.

The HFE Act has politicised Darwinism by enshrining in statute law discrimination against the weakest and most vulnerable members of the human race. It is built on a fundamental presupposition that has never been established logically, philosophically ethically or morally.