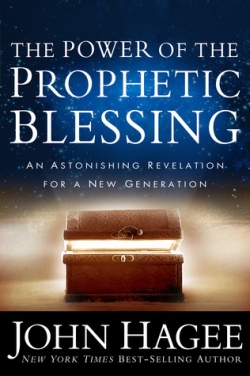 The Power of the Prophetic Blessing by John Hagee
Genre: Christian living

In this fascinating book, best-selling author Pastor John Hagee who is well known for his love and knowledge of Israel says that Scripture records ancient blessings by God which still apply today. He says these blessings, which Jewish parents have spoken over their loved ones for generations every Sabbath, account for the remarkable achievements and prosperity of the Jewish nation against all odds. Hagee says that since 1947, when the Jews returned to the land God promised to them, this tiny nation which makes up .0021 per cent of the world’s population, has been awarded the largest percentage (27 per cent) of Nobel prizes, even after the Holocaust destroyed one third of their numbers. Remarkable!

Hagee says that the power of the Prophetic Blessing has been largely ignored by Christians, who as spiritual heirs of Abraham have full access to this gracious and far-reaching gift from God. He shares testimonies — including those of his family and the mega church he pastors — of the tremendous positive impact on the lives of Christians who have actively embraced the Prophetic Blessing.

In the first section of the book, the author discusses the relationship between the Priestly Blessing (Number 6: 22 – 27) which God ordained for all His children and the personal, Prophetic Blessing that rabbis, Jewish fathers and Jesus spoke over children after pronouncing the Priestly Blessing. He sheds light on the main blessings that God initiated in the Old Testament and provides New Testament examples of prophetic blessings in action.

The second section of the book includes Biblical, historical and contemporary testimonies of the outworking of God’s mandate to bless Israel and to curse those who curse Israel (Gen 12:3). There is also a detailed account of the blessing that Jacob prayed over his two grandsons and 12 sons, and the prophetic fulfilment of his spoken words. Turning to Jesus, Hagee writes about “The Great Exchange” in which Christ who deserved the right hand of blessing from his father, instead took the shame that was due us so that we could receive the greater blessing — the incomparable blessing of redemption. In a study on the Sermon on the Mount (Matthew 5: 3 – 12) he presents The Beatitudes of Jesus as eight Prophetic Blessings that are keys to living the abundant Kingdom life that God desires for His children and achieving victory over the world, the flesh and the devil.

The third and final section focuses on the practicalities of releasing the Prophetic Blessing over your loved ones and of receiving it. The role of the spoken word and of touch are emphasised in separate chapters on releasing the blessing. The teaching sections are interspersed with real-life testimonies.