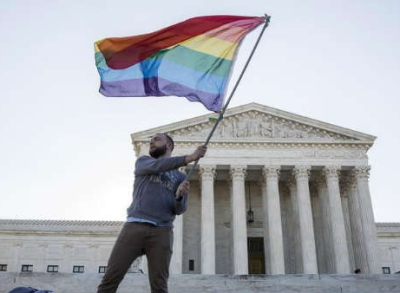 Today we are witnessing what the four dissenting Supreme Court Justices warned of in the Obergefell decision: religious liberty in America is in grave danger.

While five justices on the Supreme Court created this dilemma, it is incumbent upon Congress, and in this case legislators, to ensure orthodox religious beliefs are accommodated. Kentucky Governor Steve Beshear could solve this court-created conflict by immediately calling for a special legislative session and establishing statutory accommodations for clerks like Kim Davis.

Ultimately, this is about more than same-sex marriage licenses in Kentucky. It is about the ability of Christians and other religious people to serve in positions of public trust. If this is not resolved in a manner that accommodates the orthodox religious beliefs of Clerk Davis, this will, in effect, establish a reverse religious test barring those who hold biblical views of marriage from positions of public service. Such a religious test by proclamation or practice is wrong.

Now a court is jailing someone over this because the governor failed to act. How hard is it to change a simple form to remove her name from it? Isn’t that worth doing to keep someone out of jail because of what they believe? Governor Beshear must call for a special session of the legislature and grant an accommodation to Kim Davis.

If governors and legislators thought this threat to religious freedom would go away, the jailing of Kim Davis proves them wrong. The time to protect and accommodate religious liberty is now.