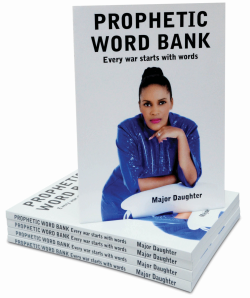 “Again He said unto me, Prophesy upon these bones, and say unto them, O ye dry bones, hear the word of the Lord” (Ezekiel 37:4).

Prophecy is one of the most important tools in Christianity that you can use to programme yourself for unending victory and success. In the early verses of Ezekiel 37, the Bible lets us know that the valley was full of very dry bones. The Lord asked Ezekiel, “Can these bones live?”

Ezekiel examined the situation, and to him it seemed like a critical case. He was not sure that they could live again. He responded in a strange way, by saying, “Oh Lord God, thou knowest!” In other words, he was telling God that it was up to Him, and only Him, to know whether they could live again or not. He was throwing the ball right back into God’s court.

The Lord then told Ezekiel to prophesy. He let Ezekiel understand that it was his call, that he could alter the course of things himself. God was teaching Ezekiel how to change things through prophesying, and He also taught him what to say while prophesying. “So I prophesied as I was commanded: and as I prophesied, there was a noise, and behold a shaking, and the bones came together, bone to his bone.”(Ezekiel 37:7).

This story is very interesting and will bless you a great deal if you try to imagine it. Think about it for a moment. Imagine that you were there – seeing this heap of bones. After a while, you can see each bone moving towards another bone, so that it can be joined. As Ezekiel prophesied again, sinews and flesh appeared on the bones. Breathing also came back to the bodies, until a great army was raised. This is not just ‘another Bible fiction’. It was real!

What God asked Ezekiel is akin to asking “can things change?” Just like Ezekiel, do not think it is up to God to bring change. Sometimes, Christians make statements like “if God wants me to have that job, He will give it to me” or “If God wants me to be healed, He will heal me” or “Maybe it is God’s will for me to be in this predicament?” This is not consistent with God’s Word.