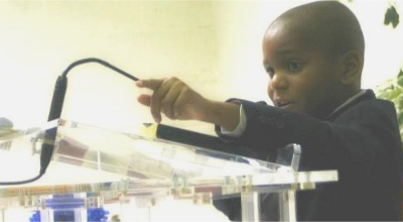 The sixth grader, who can barely see over the lectern, says God called him to be a preacher at the tender age of 7. “I had this dream; it was God speaking to me,” he told The Washington Post. “‘You’re going to do My work, ministering the gospel and running people right over to [Me].'”

Stoddard preaches at Fullness of Time Church in Capitol Heights, Md., most Sundays, and takes speaking engagements at youth rallies and churches throughout the state. He says his main calling is “bringing souls over to Christ,” but he also has the gift of healing.

Despite controversy, Stoddard was officially ordained as an evangelical minister in May. “It doesn’t matter the age that you can be licensed. It just matters … how much word do you have and how much God has called you,” he said.

His uncanny story has garnered national press attention and, with it, naysayers who say his ordination was inappropriate and that he doesn’t have the life experience to qualify him to preach God’s Word.

But even seasoned pastors have come to Stoddard’s defense, citing that age is not a factor when determining a calling from God.

“At 11 years old, you’re not going to preach experience, you’re going to preach the Word,” said Pastor Hercules Jones to ABC News. “Preaching the Word carries enough power in itself to do what it’s supposed to do.

But Stoddard’s fiercest opposition hasn’t come from skeptical adults, but rather children on the playground. Stoddard’s mother began homeschooling him after children started bullying him by calling him “loser,” “weird” and “freak.”

Stoddard insists the name-calling won’t deter him because he is sure he’s following God’s plan for his life.

“I’m blessed where I am. I know if I stick in the Word, God will bless me for it.”

Watch Ezekiel Stoddard deliver part of a sermon in the video below.