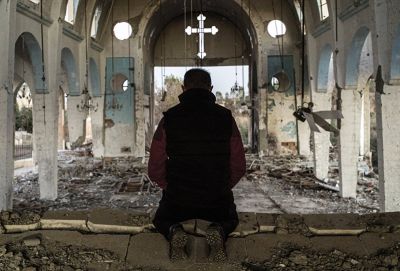 Christian aid workers have urged prayers after up to 200 Christians were reportedly killed in sustained bombardments of Syria’s northern city of Aleppo, as the country’s civil war entered its sixth year.

“Lift up in prayer the Christian community of Aleppo and all innocent civilians in the city following a sustained period of bombardment, which mainly targeted the Christian area,” explained aid group Barnabas Fund in a statement obtained by BosNewsLife.

The group said between April 22 and April 30 some 1 350 rockets hit the Christian area, killing 132 people, half of them women and children. A further 65 were killed last week, May 3, with hundreds more injured, according to aid workers.

“Of the 65 killed on May 3, an estimated 35 died when Dabbit Hospital, which treated only women and children, was destroyed by a rocket explosion,” Barnabas Fund said. “Two patients died whilst on the operating table. Another hospital in the government area was damaged in part and has now been closed down.”

After the destruction of these two hospitals, only 16 of the 134 hospitals in the Aleppo area still function, said Christians familiar with the situation.

Many of the strikes have been carried out in the opposition-held area in east Aleppo by Syrian state or Russian forces. However Barnabas Fund also linked Islamic Rebel groups to attacks. They had reportedly issued a direct threat against Aleppo’s large community of Armenian Christians on 22 April, warning, “We will show the Armenians and the Christians who we are…We have been ordered not to leave any Armenians in the area.”

Barnabas Fund quoted one Christian eyewitness as saying that “Mortars and rockets are like rain.”

Rebel-held towns around the capital Damascus such as Jobar, Douma and Harasta are now comprised of collapsed buildings and rubble. A preliminary World Bank-led assessment in six cities in Syria — Aleppo, Daraa, Hama, Homs, Idlib, and Latakia — released in January showed an estimated $3.6 billion to $4.5 billion in damage as of the end of 2014.

Yet amid the hardship, Barnabas Fund said a major prayer gathering took place by all denominations, several government representatives and Middle East Christian media outlets. “People across the world joined with Aleppo’s Christians for this time of prayer.”

Hopeful signs
Additionally, a growing number of residents from a Muslim background are turning to faith in Jesus Christ, according to church representatives and aid groups. Aid and advocacy group Open Doors quoted a former Muslim from Aleppo as saying: “What attracted me is the loving environment of the church.”

A Syrian pastor, whose name was not identified amid security concerns, said in published remarks that Muslims who are “coming to faith are ready to die for their new beliefs.”

The pastor called this “a different kind of Christianity” adding that “We’re in a big harvest, God is waking up a sleeping church.” Open Doors said it distributed 29 000 Bibles and 34 500 Children’s Bibles in Syria last year, “many of which went to new believers to help them grow in their new faith.”

One church that Open Doors partners with, the Alliance Church in Damascus, reportedly even planted a new church close to troubled city of Homs in February.

In February this year a new church-backed furniture factory was opened in Homs with support from Open Doors. The business is providing work for 30 people, and already has international orders, the group said. In another city, Open Doors was able to provide the finances to open a new pharmacy, which
enables people to buy medicines at reasonable prices, and provides discounts for elderly people of 50 percent or more.

“There are surprising signs of hope amongst the stories of sorrow and pain; some small businesses have opened, a new church has been planted, and more people are coming to Christ than ever before,” Open Doors said.

Barnabas Fund agrees but said it was crucial to “pray that all those affected by the attacks will know with full assurance”that the “Lord is close to the broken-hearted and saves those crushed in spirit”, a reference to Bible verse Psalm 34:18. “Pray that the peace process will bring a permanent end to the fighting in Syria and the restoration of peace,” it added in a statement.Mideast Syria

Fighting began in 2011 after initial protests for increased political liberty and economic reforms. People were also discontented with a failing economy and government corruption. However, experts say, it soon became a sectarian conflict between the Sunni Muslim majority and President Bashar al-Assad and his government, who are Shia Muslims from the Alawite sect.

“This religious element has been further heightened by the rise of extremist Islamic militants, such as Jabhat al-Nusra, and, latterly, Islamic State (IS). These have increasingly ‘Islamised’ the conflict: more and more, the civil war has taken the form of a jihad against the Syrian government,” said Open Doors in an assessment.

The United Nations says over 250 000 people have been killed and well over a million wounded, though this figure has not been updated in months.

The Syrian Observatory for Human Rights, a Britain-based opposition group that monitors the war, puts the death toll at more than 270 000, while a recent report by the Syrian Center for Policy Research, an independent think tank, said 470 000 deaths have been caused by the conflict, either directly or indirectly.

Nearly half of Syria’s prewar population of 23 million has been displaced by the war, including Christians. The United Nations refugee agency says there are about 6.5 million displaced within Syria and 4.8 million refugees outside Syria.

Much of the remaining population is in dire need of humanitarian assistance. The refugees have mostly fled to neighboring countries — Jordan, Turkey, Lebanon and Iraq — and many flooded Europe, where most arrive after a treacherous sea journey from Turkey.

Thousands of refugees continue to arrive in Europe, including even in countries such as Hungary, which has been building fences to halt them back.