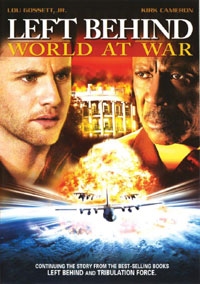 World at War is the third of three movies based on the Left Behind book series (12 novels) by Tim LaHaye and Jerry B.Jenkins which have sold an incredible 65 million copies over the past 17 years.

Based on a premillennial interpretation of the end times prophesied in scripture, the storyline picks up with a post-rapture world living in a state of peace and unity achieved by  charismatic world leader, Nicolae Carpathia (Gordon Currie). United States President, Gerald Fitzhugh (Lou Gosset Jr) has helped Carpathia to achieve world peace by persuading nations to give up their weapons. But a dangerous militia movement and an underground Christian group, who believe Carpathia is the Antichrist, work to oppose the new world order.

After a failed attempt on his life President Fitzhugh realises all is not well and he collaborates with Carpathia’s enemies in a bid to find out the truth about the world leader. Mayhem follows as a world government genocide plot is implemented and World War 111 breaks out. President Fitzhugh undergoes a profound personal transformation and he and Christian hero, Buck Williams (Kirk Cameron) have to make tough choices that will affect the lives of millions of people. Lou Gosset Jr (well known to SA TV viewers as the man with the eyes in the beer ads) is impressive as the President. And  Currie is chilling as Carpathia. The DVD can be purchased online.