The organiser of 40 Days for Life London has great hopes of the twice-annual campaign making significant changes to the social and political scene in the UK. Robert Colquhoun told LifeSiteNews.com today that while he does not necessarily directly credit last year’s prayer vigils for the end of early-term abortions at the British Pregnancy Advisory Services facility in tony Bedford Square, “I think the prayers undoubtedly had a big effect there.”

BPAS announced in June this year that their Bedford Square facility would no longer be providing the early term abortions and abortion drugs. The announcement came after pro-life prayer vigils had been held there regularly since 2005.

The BPAS spokesman said they would be “moving some services” to their facility clinic in Stratford, east London. This year the pro-life vigils will carry on there too, starting on September 25.

The 40 Days vigils are having an impact, Colquhoun said, and the evidence backing the claim can be found in the uptick in opposition to the prayer vigils. One vigil last year was attended by Bishop Alan Hopes, then auxiliary bishop of Westminster, and 300 counter-protesters showed up and shouted profanities at those praying for the unborn.

Colquhoun said that although they have not yet outright closed abortion facilities, he agreed that they are unsettling all the right people: “From the anecdotes the project has affected people, both the staff and abortion-minded women in a big way.”

Prayers ‘working’
In more than one case, he said, facility staff came up to the people praying saying, “Your prayers are clearly working because the girls aren’t keeping their appointments.”

“Abigail Fitzgibbon, a BPAS staffer and spokesman told us the staff are very affected, rattled in a way,” Colquhoun said today. “There’s obviously a spiritual dimension to the campaign.” In response to Bishop Hopes’ attendance last year, Fitzgibbon complained to the Evening Standard, “If bishops are getting behind this then I can’t see how it’s morally justified especially when women have already made up their minds.”

40 Days has only been operating in Britain for three years, and they have had a total of seven campaigns. Despite the short time on the scene, the media response has been huge, with mostly left-liberal media attacking them. But every bit of publicity, Colquhoun said, has helped them.

This autumn will see two campaigns, one outside the BPAS facility in Stratford, East London and the other in Twickenham, West London’s posh and leafy suburb. “We’re taking something from nothing and really galvanizing the people locally,” Colquhoun said, “bringing Christians together to pray in public, which is something that British people don’t normally do a lot of.”

While 40 Days received mainly negative publicity from the mainstream media, they were also covered by the Catholic Herald, the website Catholic Voices and the Evangelical group Christian Concern for Our Nation, and “all of them said that our vigils had changed the atmosphere.”

“It affects people’s consciences, and gets them to think in a bigger way about abortion. People say that Britain is a very secular country, but God is clearly acting through a lot of people in the community,” he said.

Raising profile of abortion issue
Colquhoun credited the 40 Days campaign with raising the profile of the abortion issue and influencing a parliamentary paper, from an independent inquiry spearheaded by Tory MP Fiona Bruce, that “heard many times that Parliament should change the abortion law on disability”. After amendments to the 1967 Abortion Act, children suspected of having disabilities can be aborted at any stage of pregnancy, up to full gestation.

In March 2013, Sarah Ditum wrote in the strongly pro-abortion Guardian that the “tiny proportion” of people who want to see abortion outlawed have “been extraordinarily successful in leading public and parliamentary discussion,” and laid the blame in part to the increased visibility afforded by 40 Days for Life vigils, that she described as “aggressive tactics.” 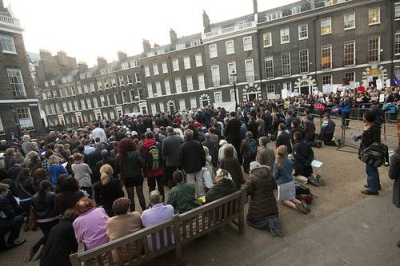 Colquhoun described the increasing visibility of the abortion issue brought by 40 Days and other campaigns as a “spiritual transfer of ownership” to bring a change in British culture from a Culture of Death to a Culture of Life.

“One of the biggest challenges in the UK is the cooperation of different groups promoting the pro-life movement – it could be like a choir singing in tune. I hope 40 Days for Life can build unity among the pro-life cause.

“Undoubtedly we are living in a Culture of death in Britain,” he said, “but what we want to see is a Culture of Life, one of top notch medical care without ideological invested interests in abortion.”

Referring to the lack of availability of pro-life obstetrics and other medical care, Colquhoun said, “You can’t give a non-vested opinion in a counselling situation when you will receive £600 plus for an abortion. Even if you are a charity, you can’t provide impartial advice on whether to have an abortion. I think people are starting to understand that.”

The problem is, he said, that “other alternatives are not provided.”

He said there are challenges for British people participating who are not used to direct confrontations. “We’ve had the whole range of reactions from thumbs up to vitriolic abuse,” he said.

“We do receive a lot of criticism and public rebuke. The British national character is polite, but you can see a different side to it when you do see anger. But this can be a response from post-abortive reaction. This anger can be a good thing if it’s bringing something to the surface that needs to be aired.”

The group has experienced “organised opposition,” mainly from student groups, but added, “that has helped the campaign.”

When the protesters showed up, banging drums and shouting, at the vigil attended by Bishop Hopes, it opened “fascinating debates and dialogues”.

“And when we did the stations of the cross, people said it had a poignant reality because there was a jeering mob present making it more real,” Colquhoun added.