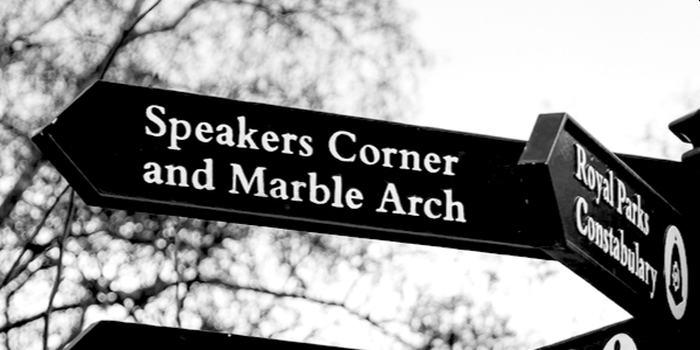 We are surrounded by ‘a great cloud of witnesses’ (Heb 12.1)

As Christians fight battles on several fronts – not only with Covid, but from increasing attempts to shut down their voice – courage is the great need of the hour.

There can surely be few better examples of this than evangelist Hatun Tash, silenced by police at Speakers’ Corner earlier this month. She has been regularly engaged in hot debate with Muslims over the inconsistencies of the Qur’an. But things had apparently got to such a pitch that police escorted her away from the iconic Hyde Park venue – ostensibly for her own safety, but effectively (by forbidding criticism of Islam) imposing Sharia Law1 on a piece of England that, since 1872, has been a bastion of free speech.

Tim Dieppe, spokesman for campaigning group Christian Concern, explained: “They acted to protect Islam from criticism…It should have been those making threats who were removed, not Hatun. The result was that a Christian preacher was silenced by police in the home of free speech.”2

Hatun has been warned that she will be arrested if she returns. Whatever choice she makes, she will be aware of God’s word to Joshua as he was about to lead the Israelites into the Promised Land: “Be strong and courageous. Do not be afraid; do not be discouraged, for the Lord your God will be with you wherever you go.” (Joshua 1.9)

This is especially appropriate as we celebrate the annual Feast of Tabernacles, recalling the wonder of God’s provision and presence in the Wilderness, now fulfilled in the Jewish Messiah, who promised his disciples he would be with them till the end of the age. (Matt 28:20)

Talking of courage, among those who helped the Jews during the Holocaust was a remarkable, and most unconventional, nun known as Mother Maria, who ran a home for the destitute in Paris to which she had previously fled from revolutionary Russia3.

Twice married and twice divorced, this beer-drinking nun dedicated her life to being a ‘mother’ to everyone after losing her only daughter to meningitis. When the Nazis took over the French capital, Maria and her son Yuri, along with a priest called Father Dimitri, focused their efforts on rescuing Jews. When Adolf Eichmann ordered all Jews to wear a yellow star, she challenged: “If we were true Christians, we would all wear the star.” And of a visiting pastor in sympathy with a movement to purge the gospels of non-Aryan themes, she demanded: “How can you be a Christian and a Nazi?”

When a Gestapo officer taunted her 80-year-old mother Sophia for bringing her up to help Jews, the old lady responded, “My daughter is a real Christian…For her there is neither Greek nor Jew.” (Gal 3:28) And when the same officer hit Father Dimitri across the face for daring to speak of helping Jews as a Christian duty, the priest raised his pectoral cross and asked the Nazi, “This Jew here; do you know him?”

This time he was knocked to the floor. Later, while facing further taunts, the priest comforted the young Yuri, saying that Christ withstood greater mockery. Both perished at Buchenwald concentration camp.

Mother Maria was moved to Ravensbruck where, after displaying extraordinary strength of character in comforting young women with her ever-cheerful disposition, the appalling conditions eventually took her life just weeks before liberation. Could the Germans be forgiven for all this?

Well, there is an essential aspect of courage often portrayed by Christians who have suffered at the hands of others – and that is the power to forgive.

Dutch Christian Corrie ten Boom somehow survived Ravensbruck, which tragically took the life of her beloved sister Betsie. And when, just two years later in 1947, she spoke of forgiveness to a church in Munich, one of the guards who had mistreated them so terribly asked for her forgiveness. He had become a Christian and knew his sins were forgiven, but wanted to hear it from her, personally.

This took great courage. It was the hardest thing she had ever had to do. But she knew that without forgiveness, we simply can’t move on – either in this world, or to the next.

“For I had to do it – I knew that,” she said back in November 1972. “The message that God forgives has a prior condition: that we forgive those who have injured us. ‘If you do not forgive men their trespasses,’ Jesus says, ‘neither will your Father in heaven forgive your trespasses.’ (Matt 6:15)”4

I conclude with the testimony of Louis Zamperini, an Olympic athlete who, having survived 47 days at sea after crashing his plane in World War II, was tortured by the Japanese. At home in America, he was given up for dead, but he eventually returned to a hero’s welcome.

However, he suffered terribly from PTSD (post-traumatic stress disorder) with recurring nightmares of his torture for which he planned to take revenge. His wife was about to divorce him as he was becoming so difficult to live with. But, in 1949, she persuaded him to hear evangelist Billy Graham in Los Angeles where he gave his life to Jesus, finally acting on a promise he made when his life was threatened at sea that, if God saved him, he would serve him.

Louis was totally transformed as, with melted heart, he eventually travelled to Tokyo to meet his former captors – not to exact vengeance, but to embrace and forgive them, just as Jesus had forgiven him.5

I believe we Christians are entering a period of greatly increased pressure, which will demand matching courage along with the readiness to forgive our persecutors. We need to be clothed with the full armour of God, “for our struggle is not against flesh and blood, but against the rulers, against the authorities, against the powers of this dark world and against the spiritual forces of evil in the heavenly realms.” (Eph 6:12)

1Extra-judicial law based on Islamic principles
2Christian Concern, 26th September 2020
3Her story is featured in an excellent new book, Defying the Holocaust, by Tim Dowley (SPCK)
4A quote from Guideposts magazine in November 1972, a year after publication of her best-selling book The Hiding Place
5His story is beautifully told in the two-part movie Unbroken: Path to Redemption and its sequel.