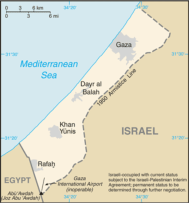 African Christian Democatic Party (ACDP) Member of Parliament and party spokesperson on International Relations, Cheryllyn Dudley today said the party is outraged by forced conversions of Christians in the Gaza Strip by the ruling Hamas regime.

In a press statement she says: “The ACDP is outraged by the situation facing the Christian community in the Gaza Strip, which reportedly comprises 1 500 members residing amongst 1.5 million Muslims.

“Christians who reside in territory which is being ruled by Hamas, a Muslim fundamentalist organization, are allegedly being mistreated and forced to convert to Islam. We call on the South African government to put pressure on Hamas to immediately put in place measures to protect Christians and those of other faiths from mistreatment.

“Christian residents of the Strip fear for their lives and have appealed for protection from the international community. Christian schools, shops and a church have been firebombed and looted, while individual Christians have been harassed, raped and robbed. We condemn these actions and view it as an attack, not only on the Christian faith but freedom of religion.”

Many Christians have fled Gaza. Associated Press reported on July 17 that since Hamas took over in 2006, the number of Christians in Gaza has decreased from 3 500 to 1 500. Many who feel threatened also choose to keep silent about the way they are treated.

“The ACDP believes that every person has a right to practice their religion freely and should not fear for their life or be forced to convert to another religion”, Dudley said.