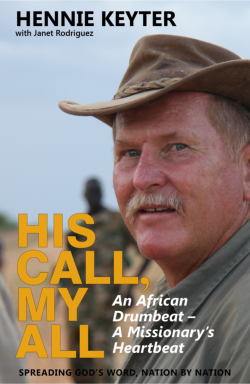 Hennie Keyter, a hardcore South African missionary with a passion for spreading the Gospel in hostile parts of Africa, has documented his life story in  a new book called ‘His Call, My All: An African Drumbeat – A Missionary’s Heartbeat’.

The book, by this legend in Africa missions who laughed as he faced a firing squad in Mozambique, will be released in February and can be ordered from his website or downloaded in e-book format.

A press release by Tracey Mc Donald Publishers gives a foretaste of what can be found between the book’s covers: “In the 1970s Hennie Keyter was an angry young man, fresh out of military service for the apartheid government of South Africa, unsure of his path in life and deeply uneasy about his faith. ‘The way I saw it, church was for strait-laced people who did the right thing, not for misfits like me. I was busy living life by my rules now, after years of striving and rejection. Even with all of my success and outward strength, still I walked around feeling unacceptable and undervalued. It was as if I was always the eight year old packing up his bags to be moved somewhere else. I had spent years hardening myself and I was determined to live without the approval of people – especially Christians.’

“When God revealed to him that He had a purpose for him and a calling on his life, at first Keyter was not ready to hear it. When he finally accepted and understood his mission, a flame was lit in his heart that nothing could have extinguished. But nothing could have prepared him either for the extraordinary spiritual journey he was about to embark on which would take him wherever God wanted him to go: from Malawi, ‘the warm heart of Africa’, to Mozambique at the height of its civil war, where he was sentenced to death and faced a firing squad, from a less than welcoming beginning in Zanzibar, to the United Nations base at Lokichokio on the border between Kenya and Sudan (where on one trip he discovered that he had a price of US$10 000 on his head).

“Desiring only to do the will of God and to spread the Gospel, Keyter took up the challenge of taking the Gospel to many of the countries on the African continent and in the Middle East, building up leaders and planting churches in poverty stricken areas, lands devastated by years of conflict and deprivation, and war zones where soldiers seemed to have lost everything, even hope. Through the bushfire of mass evangelism and his dedicated teams of volunteers, supported by the love and faith of his wife Rita and his children Anton and Mari, in ‘His Call, My All: An African Drumbeat – A Missionary’s Heartbeat’ Keyter looks back at his life in the service of the Lord, and forward to continuing His work for as long as God requires it of him.”