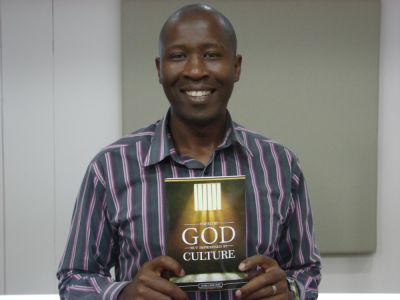 “Freed By God But Imprisoned By Culture” is the provocative title of a new book by Port Elizabeth pastor and author Afrika Mhlophe.

Mhlophe says the idea for the book came to him while he was writing his first book, “Christianity and the Veneration of the Dead” which was released in October 2013. The first book is aimed at freeing people from the deception that dead people can influence their lives. The new book aims to free people from man-made cultural ideas that enslave and hinder them from fulfilling their God-given purpose.

Mhlophe who in April will be a speaker for the third consecutive year at the Karoo Mighty Men Conference (KMMC) says his involvement in cross cultural ministry has heightened his awareness of the grip that ethnic-based cultural views have on many Christians in South Africa.

“I think, frankly, that more Christians in South Africa define themselves based on ethnicity than on the Kingdom of God. We may say we don’t care so much about ethnicity until the rubber hits the road like when something is said about your race and the real thing comes out,” he says.

He says the issue of a primary cultural identity  “goes to the core of the Gospel” which is to restore the original plan that God had for man when He placed him in the Garden of Eden and which man messed up through sinning.

“That is why Jesus is called the Last Adam.  So, when we don’t embrace our new identity in Christ we hinder the purposes of God for the Earth through us. God is God and He is not going to work through our paradigms of race and so we are left  conflicted because we are trying to find value in something that has no value,” he says.

Looking through a Biblical lens at issues such as our origin, culture, identity, the power of influence and culture, African cultural practices, and “cultural facism”, Mhlophe’s book sets out to provide readers with tools to navigate the conflict between their faith and their ethnic-based cultures.

Mhlophe says the book will shortly be available online on a website he is developing and through Gateway News. It will also be available at the KMMC from April 24 to 26. From May he will embark on a book tour around the country.